Two young architecture firms have joined forces to create the non-profit association Adobe for Women. The goal of the association it to both recover and teach vernacular construction skills while simultaneously providing aide to women in need.

Inspired by the work of Mexican architect Juan José Santibañez, who twenty years ago helped twenty women in difficult living conditions to build their homes, two decades later blaanc borderless architecture and CaeiroCapurso have planned to construct twenty sustainable houses in the indigenous village of San Juan Mixtepec, in the southern Mexican state of Oaxaca.

The construction of the first house began in March of this year, enthusiastically lifting the women’s hopes for this project. With their commitment and determination they have produced more than 40.000 adobe bricks using earth from the surrounding areas. The houses are energy efficient and built with local materials such as adobe and bamboo. Each house costs only 3 830,84€ (the price of half a square meter in Paris or Amsterdam or a square meter in the Baltic capitals). For these twenty women with limited financial resources, having a home represents the dream of a lifetime. 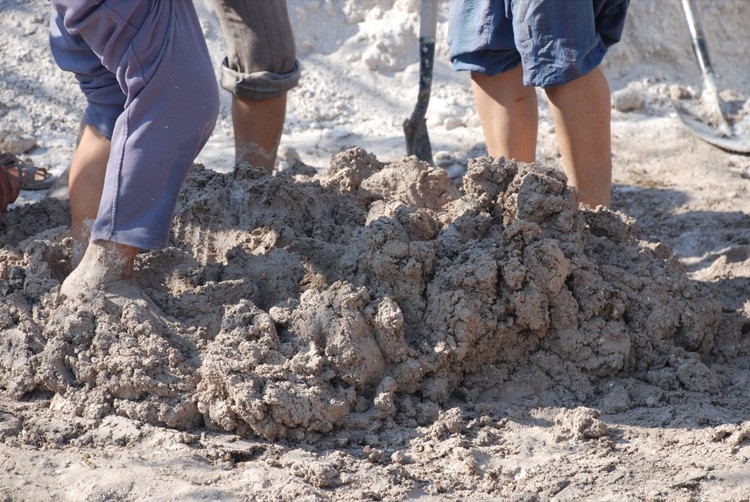 Eight houses have already begun and in some cases the walls are almost ready. This is all possible due to the generosity and help of many volunteers. The group Casa Tierra as well as students from several faculties of architecture of the city of Oaxaca participated in a workshop about Adobe Building and helped erect Flavia, Elena and Viviana’s houses. Students of the International Masters in Sustainable Emergency Architecture in Barcelona, in cooperation with Architecture for Humanity, also came to contribute with hard labour.

The founding architects believe that this is the first of many projects that could improve living conditions for people around the world and are eager to implement the project in countries that have the same necessities and where a house that can be called a home is of dire need.

The first project of the Association Adobe for Women will be located in Oaxaca, in the village of San Juan Mixtepec in Mexico. For many years the country has been facing a migration phenomenon of the male population, who leave in hope of a better way to support themselves and their families, unfortunately many do not return. This worsens the already fragile situation of the women, who, abandoned by their husbands are left to take care of their children under difficult circumstances and no access to health care or housing. By participating in this project the women are slowly changing the destiny of their own lives.

The house, with a simple, rectangular plan is formed by two nucleuses: One private and one public. Each one is formed by two intersecting arches that cross in the centre underlining the notion of space and marking each spaces activity. This allows ample spaces even though the area is small. The patio presents itself as an extension of the house directly connected to the kitchen. It is supported by a wooden structure lined with bamboo, placed with spaces in between making the wall translucid. The patio opens to vibrant natural surroundings, creating a privileged socializing area. The one floor house is composed of modular spaces that are adequate to the dimensions of the materials used. The modules provide better earthquake resistance since the walls intercept every 2,4m. The house is punctuated by the colour on the doors, which can vary depending on its occupants and should use strong marking colours, which are characteristic to Mexico. The variety of textures present in the adobe, bamboo and roof tiles contribute to a richer and more harmonious entirety.

ADVANTAGES OF THE PROJECT

The local material and the architectural composition associated with low-tech solutions make this house a model of sustainability and energy efficiency.

Solar Energy To take full advantage of the solar energy, small solar panels will be installed to convert the energy from the sun into electricity.

Water A deposit collects rain water from the roof and it is re used for watering the vegetable garden, the kitchen and the bathroom. This way the women are less dependent on external water supplies. Other than the reuse of water, a treatment system will be implanted through the use of a grey water filter made up of gravel, plants and coal. This water may be used to water the vegetable garden.

Composting Toilet The “Composting Toilet” is a system used in bathrooms where, instead of using flush water or sewage systems, urine and feces are stored and treated through composting turning them into nutrient products for soil. There is no use of water, therefore there is no water waste and water contamination is avoided. It is similar to a composting system, as oxygen is also needed for the process to take place. A chamber where feces and urine (combined or separated) are stored is connected to a tube or chimney to allow hot air to rise leaving the indoor spaces with fresh air.

Composting Composting is a biological process where microorganisms transform organic matter, such as manure, leaves, paper and food left overs, in a substance similar to soil known as compost. Other than reusing a part of domestic rubbish, compost improves the soils structure and acts as a fertilizer.

Estufa Lorena The Estufa Lorena is an energy efficient, traditional stove that uses less wood to cook than normal wood stoves. It is basically a closed box of mud and sand with a chimney. The wood is place inside the box and the food is heated from the hot smoke. This system reduces wood consumption by 60% and improves the air quality in the kitchen. This is the first step along a long road. But the belief and happiness of watching architecture contribute to better living conditions for people make all the effort worth it.