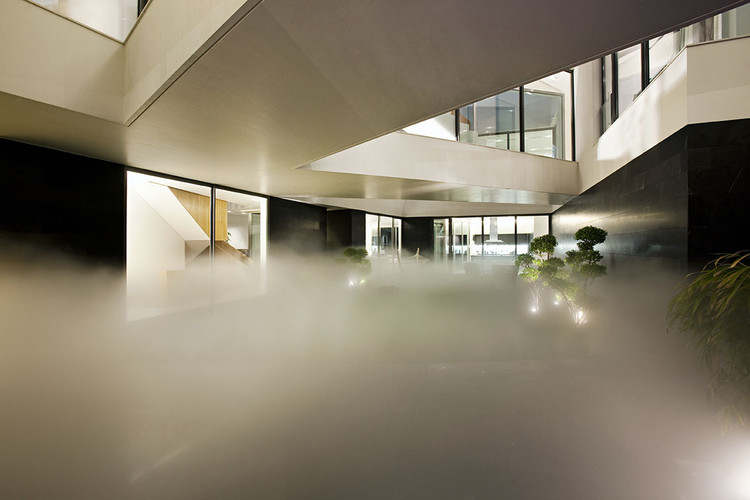 Text description provided by the architects. Kuwait’s urban fabric mostly consists of detached single-family homes highlighting a clear example of city-sprawl. To adapt to the desert climate, the distances between the built volumes are minimal, resulting in shaded spaces between houses. These spaces that work well as temperature regulators; however, result in facades with little privacy and limited views. This creates an added challenge to create projects with personality that are not based purely on an exercise in façade design.

Given these circumstances, our focus was to design a home that expresses the clients’ needs, clearly marking the buffers and transitions that any guest could understand. There are guided routes, hidden areas, exposed areas that are all expressed through the architecture, rather than signage. We want the house from the street to be seen as a resounding permeable volume, that is not transparent, however friendly yet private.

Physical barriers can be seen in varying degrees, blocking from sight the large opening on the upper terrace that allows you to see through the house. From the inside, the barriers become the volumes that open to the guests, the rooms that dominate the spaces on the upper levels, defining the spaces below them. The search for an understanding of the nature of an Islamic family culture living with a Western lifestyle has shaped the overlap of concepts and is reflected in the relevance of the major pieces in the facade, privacy and sun protection.

Typically the client has a specific program and an actual site, and our job is to make the two complement one another. In the case of the Secret House, the client was occupying the given site in a house that neither met their aesthetic desires, nor their programmatic needs. It is a place with great potential, with wonderful views of the city, and a family who wants privacy. We plan to design a system that would unify these requirements: a house that looks towards the inside and only at the top level opens up to views towards the skyline of the city.

In this case we had only one street-facing facade, and only from this side could one look onto the horizon without being seen. We have placed more public activities on the ground floor, where as you enter, you find a guest living area that is distant from the other rooms. On the other side, after a circulation buffer, you find access to a family living area that connects the backyard with the central garden.

On the upper floor, rooms are positioned according to privacy and importance, alternating with areas for daily family use. From this level, a staircase runs through the courtyard and leads up to a more private space with a large covered terrace that opens out on the main façade. This allows you to enjoy both the city skyline and the sea view at the horizon in a private, shaded and lush landscaped area. 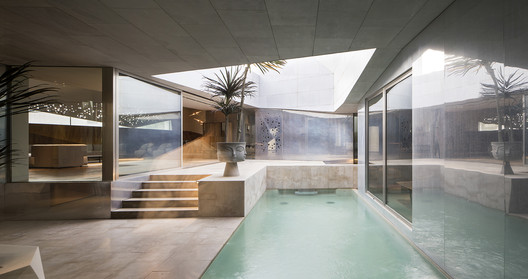