Víctor Enrich recently shared with us his architecture 3D illustrations and visualizations.  Over the years he has experimented with a variety of mediums resulting in these 3D creations.  A full description of his work and further illustrations following the break. 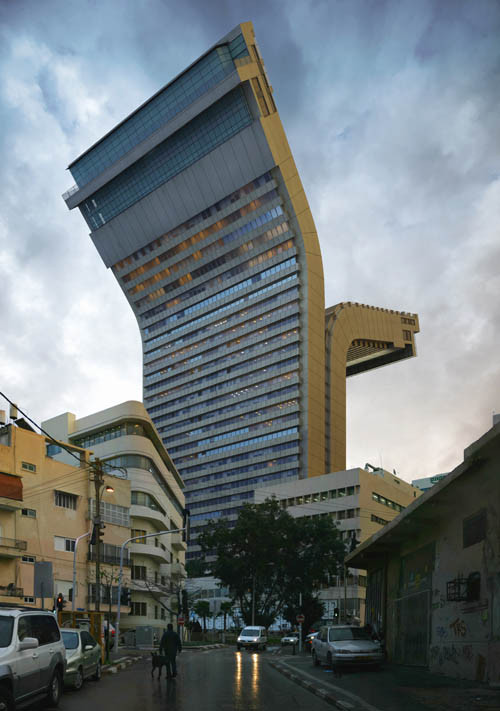 From the artist: My artistic career begins at the age of 10 designing unreal cities, with all their streets (and their street names), their buildings, their topography, their bus and subway lines and all the elements that any city has.

These designs are made in 1:5000 scale, by pencil, on A4 sheets of paper creating a puzzle to reach areas of several square meters. At the age of 13, computers are discovered as well as some CAD drawing programs. Pencil is left behind as an instrument while the mouse and the monitor become important. 2D drawings of cities gain in precision and can be printed at different scales.

At the age of 15, 3D CAD software is discovered, so the drawings are not bi-dimensional anymore and some primigenial virtual urban spatialities are born.

The sources of inspiration are taken from books on architecture, urbanism and physical geography, regularly consulted in specialized libraries, as well as cartographic maps at a very high graphic detail. Among all the real cities analyzed, special mention to the American city, which plays a key role in my virtual imaginary, because of the size and exoticism of their buildings and streets, and by the huge presence of motorized routes of some magnitude. American TV series of the 80s become an important source of imaging.

At the age of 18 architecture studies are begun with the belief that they are the closest field to the genetical passion for cities and urban spaces. However, throughout the years in college, all the skills developed in 3D digital fields allow to start working professionally in the areas of architectural visualization. First clients are college architecture professors with their own studios who see in 3D a powerful new communication tool. This exhaustive professional dedication creates a big gap of 10 years of no creation at all which leads to a point of almost completely loss of interest in 3D virtuality. By not accepting this situation, from the year 2005 some new 3D creations are made in order to go back to those forgotten feelings of the childhood. Slowly slowly, more time is dedicated to be creative rather than to work professionally for third parties. At this point, photo retouching techniques are added in order to achieve far more realistic results than those obtained previously. This new technique, together with others, allow the works to make a qualitative leap, which are not intended anymore to be strictly unrealistic but, instead, a result of mixed real environments with virtual objects inside, entering the present stage of the works.

By 2010 production is greatly increased, helped by the artistic atmosphere flowing into the city of Tel Aviv.

The works tend to resurrect the urban form, probably the most overlooked field of the architectural world … the cities of today have not been designed. Even, most of them were never designed, so what we see is the result of very random processes of addition and subtraction of objects, buildings, roads etc, pending on strong private economic interests. There is a background process of understanding the city at a geometric level. Urban spatialities are analyzed and described in order to rescue the anonymity of them by applying all kinds of geometric operations that the buildings themselves inspire. On a psychological level, important to highlight the role of the surprise effect when visiting new spatialities, which facilitates to enter a phase of mental excitement where imagination begins to flow freely.

Also noteworthy is the importance of the popular culture, gained through daily activities performed in that same city or country that contains it. As for the techniques, a combination of photography and 3D architectural visualization is used. Once the object is chosen, it is shot from a point easy to recognize by users, not pretending to achieve the greatest picture ever, but instead, a picture that anybody could do. The shot is the basis to produce a replica of the building by using very detailed photogrammetric techniques that end with the creation of a three-dimensional model that fits almost perfectly into the picture. This three-dimensional model can only be used in that shot because it has intrinsic optical distortions that makes the model impossible to be used in another photograph. When is completed, begins the emulation of the environment light tending to obtain the color gradients that appear in the picture. Then after, architectural textures identical to the real object are created.

At this point, the 3d building is rendered in order to test how similar is to the original picture. If the resemblance is good enough, then it’s time to apply all the deformations and/or modifications thought at the beginning of the artwork.

We are therefore facing a process that requires great precision and dedication for which, before starting any work, it must have passed through a very selective process.