Save
The Business of Architecture: Panel recap
Share
Or
Copy

Why do architects choose architecture? Typical reasons include a deep passion for form and a desire to leave meaningful, functional design as a legacy. Rarely do you hear that an architect held a burning desire to do business and THIS was their chosen means to that end. Rather, doing business is necessary to follow their pull toward architecture. And so the industry is filled with capable architects who know little about the mechanics of running a firm. Payroll, HR, marketing, sales and public relations are foreign topics. They want the jobs, but they don’t know how to get them. They need employees, but lack management skills or knowledge of how to team build, recruit or downsize during a recession.

In the coming months, I’ll be writing various articles to address these topics that impact architects running their own business – large or small. We’ll also consider marketing ideas that have a proven track record of helping companies differentiate from the competition.

The theme that consistently surfaced was the importance of relationship building and the ability to communicate. Those skills set apart those who have excelled. Some highlights from each panelist are below. 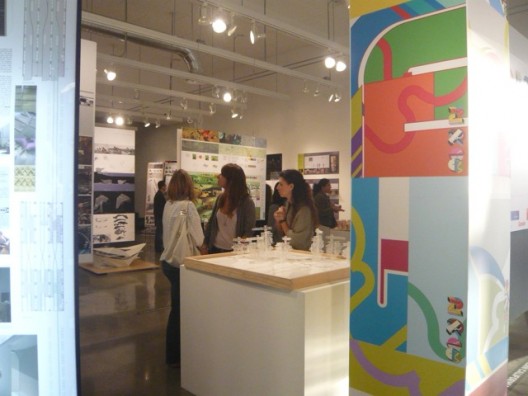 Ehrlich calls himself a world citizen. He spent his early years in the Peace Corps working in Marrakesh and learning the philosophy and skills of the indigenous people. He has also travelled through Sahara and West Africa and worked in both east and west coast firms before opening his own midsized firm.

Ehrlich acknowledges that traveling affected his design philosophy significantly, but it also made him a good listener, a better communicator and acutely aware of the value of personal relationships with international clients (a large sector of his work today).

He calls his 25-person firm an atelier, an architectural family. He sits on the main floor with the other employees, and everyone has an equal voice. He looks for passion and ambition in new hires and says they mostly recruit through current employees or referrals within their internal network, thus reinforcing the idea that relationships are crucial.

He encourages students to have many varied life experiences, which serve to open their eyes and make them more well-rounded and wiser people. As for risks, Ehrlich says take them and step over perceived boundaries in order to grow. He takes a long view on the profession of architecture, offering, “I’m the tortoise, not the hare.”

Originally from Virginia, Myers received an appointment to the Naval Academy and went onto the Air Force as a fighter pilot. Upon return he worked 70-hour weeks for renowned architect Louis Kahn, before moving to Canada to become editor for an architecture publication. He later opened midsized firms in Canada and Westwood, CA and taught in the architecture department of UCLA. Myers attributes his success to three characteristics: confidence, enthusiasm and resilience.

Speaking to those interested in having their own firm, Myers says, “If you want to go out quickly on your own, you have to get known fast. I edited a magazine and worked in local politics to cause change around me. I became known for proposing alternatives.”

Myers agrees that almost every experience in life affects one’s outlook. He says, “Experiences give you good intuition, which will serve you in countless ways. You know more than you think, and yet you don’t know as much as you think you do.”

He also addressed the fact that most architectural schools teach independent work, but in a job, new hires will most certainly be working in teams, so those skills of collaboration and teambuilding are critical.  He considers a partnership between those with complimentary talents as the perfect business structure because it’s challenging to find the Renaissance person that is good at business, design, sales and leadership.

Fern teaches business strategy and project management at the UCLA Extention/Cal Poly Pomona Joint study program for masters degree in interior architecture. She has been the faculty advisor to the ASID student chapter for six years and a practicing interior designer since 1996. Before interior design, she was a financial controller and CFO for companies in the garment industry – experience that qualified her to teach numerous CEU business courses. She holds the board position of president elect for the ASID LA.

On the topic of relationship building, Fern advises students to “Find a thread of commonality with those you meet to create connection. It could be where you’ve traveled, related interests or mutual acquaintances. It gives you reason to stay connected and to be hired over other candidates.”

After weathering several recessions, she advises all practitioners to work on their SWOT (strengths, weaknesses, opportunities and threats), explaining those elements can become opportunities. She also suggests architects and designers take additional classes and add new skills to become more valuable during market slowdowns.

Fern echoed Ehrlich in suggesting students takes risks. Using a sailing analogy, she said, “You have to be willing to throw your lines off the boat and leave the shore.”  Fern follows a mantra of “Do good to do well,” which speaks to the idea of prospering by helping the greater good. She suggests students and emerging professionals participate in Habitat for Humanity or volunteerism in their community to help shape the change occurring around them.

Horne is president of NDH Search Worldwide, an architect, designer and engineer placement firm. Since 1998, she has worked with 100 A+D firms worldwide as well as regional and mid-sized firms. She says smart job candidates today care about more than salary and vacation. They are asking about competitions, financials and weighing the employer’s direction against their long-term trajectory.

A veteran at pairing international employers and candidates at all levels, Horne says, “Reputation may get you the first conversation, but clients want to meet you and see you in their environment and in their culture.” In potential matches, she looks for elements of personality and experience that communicate adaptability. Horne also says new hires should be unassuming, enthusiastic and teachable.

Horne explains that interviewers have a goal – typically to hire for a particular project or client, but that doesn’t mean they are gifted at asking candidates the right questions. She suggests emerging professionals weave details about their influences and inspiration into the interview conversation so potential employers see more than the hard facts of the resume. She also notes that new graduates need to be very good at their technical skills, saying employers want to see someone that can hand draft.

As for networking, Horne suggests architects and designers skip association events and

Frequent the places where the client goes instead. For example, she says, “If you want to build music centers, attend performances at existing centers and learn about how the audience experiences music. It’s also a way to naturally build relationships with those that love the arts.”

In addition to online applications, Horne encourages candidates to establish a direct connection with a designer, project manager or job captain at a firm whose work they appreciate. She suggests candidates write them personally and find commonality. This done in tandem with a traditional application will help them shine amongst the competition.

Collectively, the panelists agreed the economy seems to be turning around, however the past few years have forced everyone to streamline operations and reconsider how they do business. Going forward, practitioners will need more than design talent to excel, as experience, personality and perseverance factor heavily into their long term success.

Jenn Kennedy is a business and lifestyle writer and photographer. She has a weekly column profiling Santa Barbara business leaders on Noozhawk.com and contributes to Jane, LA Confidential, Las Vegas Magazine and dot429.com. Her first book, Success by Design: Revealing Profiles of CA Architects launched in February. She blogs at www.kennedypens.com.