The National Gymnastics Centre Pegan Petkovšek, designed by Enota, is part of the comprehensive renovation of Svoboda Sports Park in Ljubljana. It is the first of the three sports halls that are to be built on the western edge of a belt between an access street on one side and a large greened park layout with sports grounds on the other. The building of the gymnastics centre is placed on the northernmost part of this belt. The northern and western edge of the building reference the building line regulated by the spatial acts, which also stipulate the greatest built ratio and the height of the building. The strict urban regulations necessitate a very compact design that allows for little deviation. 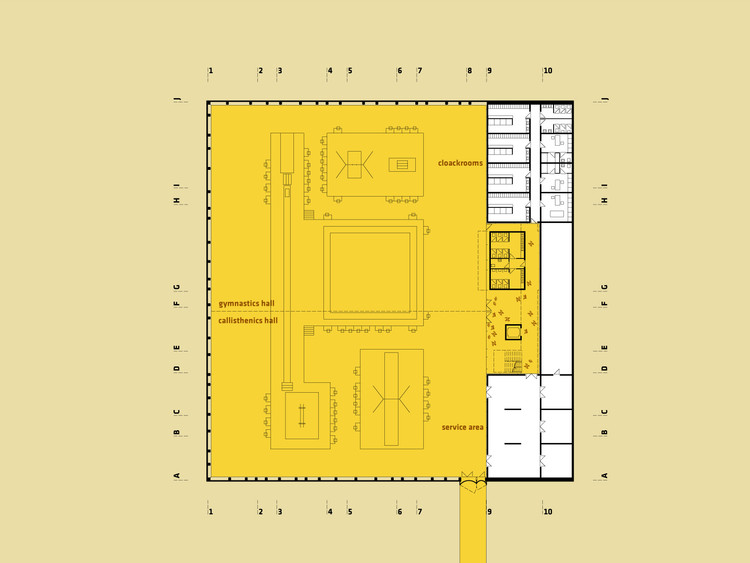 The proposed spatial design with its predetermined compact volumes of sports halls divides the belt into three clearly defined sections intended for the halls, which are separated from one another by parking spaces. Going somewhat against the urban design specifying the placement of vehicle and pedestrian building access points from all perimeter streets in alternation, traffic access is organized from Koprska Street in the west while the pedestrian accesses are clearly separated and arranged from the park side in the east. Immediately next to the buildings, the park features a wide central footpath with connections to all access platforms of the halls.

The National Gymnastics Centre is designed primarily as a daily training facility where athletes will spend a lot of time. The central guideline was thus to design a building with plenty of natural light which would appeal to its users and inspire in them a feeling of direct connection with sport at all times. The key element of the functional design is a branching central communication linking all the programmes so as to provide uninterrupted views onto the training grounds. The views on sport stay with the users not only along the primary communication but also from the offices, the shared spaces of the sports hotel, the shop, the restaurant, and other spaces. With its branching shape and recognizable color, the central communication is also the main styling element of the interior; in fact, it actually continuously extends from the exterior since the entry platform in front of the building also features as its constituent part. Similarly, the communication extends onto the stands; along with various other well-placed expansions, the stands – beside their primary function – also allow the training surfaces to be increased.

The building of the Gymnastics Centre is designed as a compact volume housing two larger halls, one considerably lower than the other, placed next to each other. The rest of the stipulated programme is placed along the eastern side bordering on the park, and into the space above the lower of the two halls. The perimeter walls are designed as a light steel construction allow ample light to pass through. The walls of the programmes placed above the halls are of similar design. On the roof, the linear design of the programmes allows their perimeter walls to be used as wall beams with large static height; as a result, no additional construction is needed to bridge the relatively large span of the hall. The cantilevered wall beams above the halls enable the installation of linear roof skylights. They provide even lightning to the central sport surfaces, which – due to the depth of the building – would not be possible by using the facade surfaces alone. The entire sport surface is thus evenly lit.

The building is clad in a varied facade membrane made of expanded sheet metal painted in strong colors. The seemingly complex but technologically simple facade wrapping entwined with an intense interplay of light and shadows gives the building a recognizable and lightweight expression and suits the character of the content that it houses. An additional function of the expanded sheet metal is protection from the sun while at the same time, the fine structure does not obstruct the views of the building’s users towards the exterior.