Save
In Progress: Plug in Building / MiAS Arquitectes
Share
Or
Copy 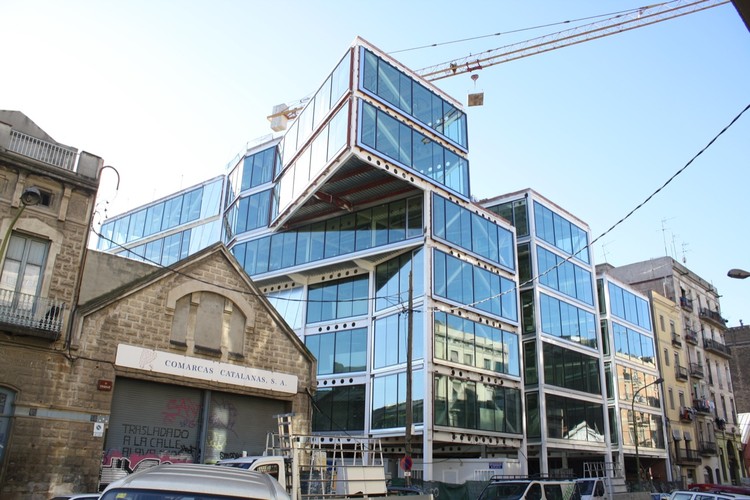 Recently, the 22@ district in Poble Nou (Barcelona) has been undergoing multiple transformations. The blocks that Ildefonso Cerdà designed as part of the urban latticework of the Eixample, were initially occupied by industries, workshops and eventually isolated residential buildings. Nowadays, most of the structures have been demolished except those that deserve to be conserved, due to their singularity.

The gaps between the historic existing buildings have been refilled with new residential areas, hotels, offices and equipments. The building lot is situated between three streets: Pujades, Pamplona and Pere IV (one of the streets that doesn’t respond to the orthogonality of Cerda’s Plan because it’s old condition as an historic road). Certainly, it is an irregular plot where the traces of the old parcellation system in relation to Pere IV street are still maintained. This geometry allows us to set up the project in relation to the existing buildings that have been preserved. Existing buildings include a residential buildings on one side of the block and an old industrial building, made of brick and stone, that faces Pamplona Street on the other side.

The aim of the project is to rebuild from the old parcellation rules, following a geometry that obeys the Pere IV Street orientation. The irregular geometry of the plot brings the opportunity to walk across the project from one street to the other. The building organizes itself with an optimal distance between blocks in order to locate offices, resulting in the creation of three main buildings crossing across from Pujades Street to Pere IV. The elevations of the building clearly show how this transversal secondary streets appear between the three structures, as if they were passages, allowing light to enter the interior spaces of the offices.

Consequently, the volumetry does not maintain a constant alignment. It presents some doubts about the section in relation to the passage or the street-courtyard and in relation to the existing industrial building in Pamplona Street. The project presents a fragmented building with vertical voids between the volumes. The spatial complexity is broken in a middle point between the main streets, while a transversal axe generates all vertical accesses with stairs, elevators and vertical installations.

Underground, the building presents a two-floor parking area with access next to the preserved industrial building. The structural system is a steel skeleton that presents several levels of complexity. The building is proposed as six independent entities, joined by a transversal central passage, where stairs and elevators are located. The direction of the principal beams is parallel to Pere IV street. The secondary structure follows the interior passages direction. Consequently, none of the encounter between steel profiles present an orthogonal match.

Each one of the six entities is composed by multiple bracings with diagonals or steel crosses, making it stable on its own. The perimeter is defined by three main façades: a façade to the street with two non-conventional pillars, shaped one by one with four thick sheets of iron; a conventional façade with intermediate pillars and a façade to the pedestrian passage, where the structure hangs out from the superior floor in order to leave free the ground level for pedestrian use. Finally, the higher building exhibits a trapezoidal cantilever on the two upper levels, as if it was trying to cover the neighbor building. Steel diagonals are used to hold the structure and reproduce a huge beam of seven meters tall by sixteen meters long.