Save
In progress: Rennes Métropole Crematorium by PLAN 01
Share
Or
Copy 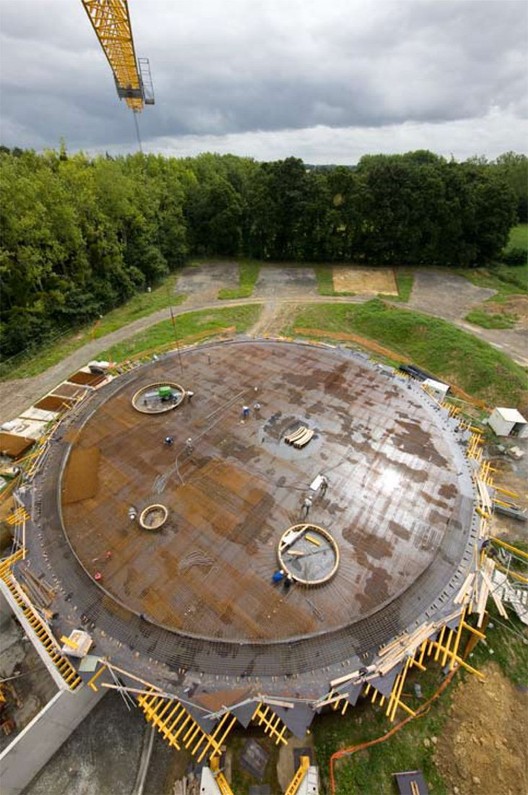 Gone but not forgotten

A sensitive subject deserves sensitive treatment. Few projects involve so much emotion, so much human and cultural input.

Few projects are so fraught with pitfalls and hazards. The challenge here is to create an area and time of dignity and serenity. The spatial layout must reflect the site’s symbolic and emotional function in order to accommodate the diversity of people’s reactions. The choice of simple shapes and materials provides an integrated landscape of peace and tranquillity. In this place where you must detach yourself from the outside world, the pathways encourage a gradual progress from the external environment towards internal intimacy, from outer noise to inner silence.

The crematorium rises up, solemn and imposing, for all to see. Gleaming and open, it appears as a great disk floating in the middle of a forest clearing. The circular shape, symbolising the beginning and the end, is a recurrent theme throughout the spatial configuration. It allows for free philosophical, religious or cultural interpretation. Completely non-denominational and easily accessible to all, the building ritualises one of life’s sad but unavoidable moments.

The crematorium roof is formed by a single smooth, round concrete slab, 120 metres in circumference. Before the concrete for the slab’s public roof area was poured, 45 tons of reinforcing steel were required to ensure the strength and uniformity of the underside.

In order to obtain a perfectly smooth surface, the concrete had to be poured in one single operation. This took place on 4th September. The work began at 4 am and lasted until midday. Around 50 concrete mixer trucks were required to bring fresh concrete on site.

Different paths, different rhythms The first problem to be addressed was that of parking, in a situation that requires escape from the mundane world of the automobile. The consideration of the means of access was influenced by the wish to avoid imposing one single common path leading towards the funeral ceremony, but rather to create a large number of possible approaches, all converging. To engender a feeling of participation even in the first outer circle.

Circles are open symbols and tools of the imagination They are the perfect shape for creating the conditions required for this diverse approach.

The first landscaped boundary threshold is an enclosure formed by a thick low stone wall, broken in places. This impression of a woodland clearing is reinforced by creating a line of trees on the parking area to mark the threshold where you leave the everyday behind and enter a more rarefied world of ceremony.

Having passed across this first space, which is built yet permeable, you go down a gently sloping planted section that converges on the building standing at the end of a large curved open-air horizontal space. Three new ‘circles’ located in this clearing trace out the pathway: a circle of fruit trees planted on the meadow; a cracked concrete disc with grasses growing out of it, and then the pool for collecting rain-water. The building itself appears like an enormous disc floating in the centre of this clearing and bringing together the various elements of the programme.

A non-religious ceremony The deceased person is perceived as a distinguished guest, a focus of attention to whom access is very special and solemn. This aspect of access influences the pedestrian-flow design for the entire site.

Not just a building, a complete site With its grass-covered roof and large exterior pool, the project blends into the vegetation of the landscape. It is also an integral part of its geographical surroundings through the use of local materials such as granite and wood. By incorporating various current international frames of reference (HQE, Habitat and Environment, Effinergie, LEED, BREEAM, etc), PLAN01 has defined 6 criteria for optimising the crematorium’s environmental performance. In this project the environmental issue is treated as a springboard for innovation, not as a constraint, as an underlying principle, not just as a ‘green veneer’.

The large central hall dominates the entire complex, by simultaneously incorporating the hall itself and the walkways, both overall and as part of a hierarchical system. There are no corridors but rather flowing spaces, mainly illuminated by natural light with framed visual outlets towards the exterior. This is to reduce the feeling of being shut in, which could arise in such circumstances.

Two large areas stand out in the sections open to the public: the rooms where the ceremonies take place and the waiting rooms. The ceremonial rooms give the impression of being large, dark and intimate.

These rooms are designed as huge focussed spaces that magnify the symbolism of the people assembled round the body of the deceased. The rooms are linked with light and air via dedicated patios. Their link with the sky is therefore completely contained in an external space that belongs solely to the mourners gathered round the deceased.

This layout design reconciles the contradictory need for openness and intimacy, and is complemented by draperies that enhance the rooms’ acoustic characteristics.

The waiting areas are located as ante-rooms to the ceremonial rooms. Their walls are made of glass but completely hidden by translucent curtains, so that the levels of intimacy and openness can be controlled.

In this area, which is threaded in different ways by informal pathways, you gradually move from the noisy outside world into an inner silence, through ‘natural’ sounds: a man-made pool, the wind in the bamboos, the songs of the birds attracted by the fruit trees, footfalls etc