Preston Scott Cohen‘s winning competition proposal for the Taiyuan Museum of Art is currently under construction. A cluster of buildings unified by continuous and discontinuous promenades both inside and outside. The building responds to the urban parkscape in which it is set; visitors are encouraged to pass through the building while not entering into the museum itself. An exterior ramp threading through the building connects the heterogeneous hardscapes, lawns and sculpture gardens. The integration of building and landscape registers multiple scales of territory ranging from the enormity of the adjacent Fen River to the intimacy of the museum’s own particular spatial episodes. 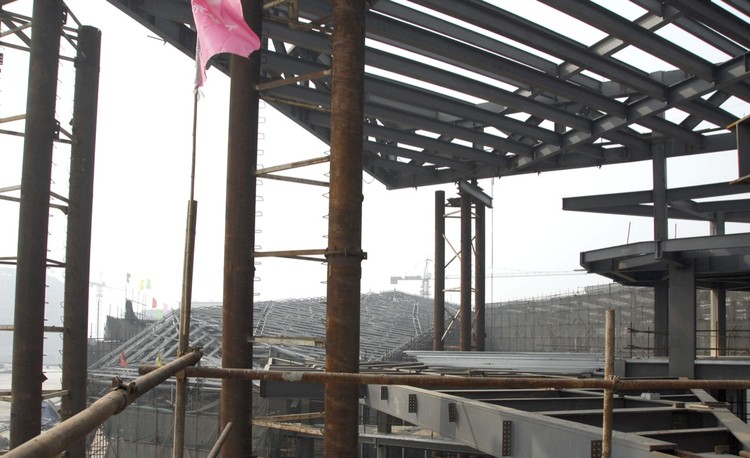 Inside, the security of museum space is maintained by a highly controlled interface between gallery and non-gallery programs including an auditorium, bookstore, restaurant, library, education center, and administrative wing. The individual sets of elevators and cores are distributed to guarantee easy access and easy divisibility between zones regulated by different schedules and rules of access. At the garage level, the services are intricately planned in order not to interfere with parking lots for staff and public.

The museum galleries are organized to ensure maximum curatorial flexibility. The galleries can be organized into a single, spiraling sequence for large chronological exhibitions or into autonomous clusters operating independently. For visitors architectural cues offer – the placement of ramps and portals, the expansion and contraction of space – provide a means of wayfinding. The building gives visitors the freedom either to follow a predetermined chronological sequence or to skip from one set of galleries to another, in a nonlinear fashion.

Exterior light weight honeycomb panels with stone veneer produce an evocative and elusive material effect and the perception of an exceptional scale. The panels are reflective as if metallic, seemingly too large to be stone panels, but clearly possessing the properties of both materials. Advanced parametric software allowed panels to conform to standard widths, reducing material waste.