Text description provided by the architects. Friedrick Kiesler was a strong believer in an elastic spatial concept, one that must be capable of providing an optimum response to the varying social concerns and uses of its occupants. The initial shape of the Endless House shows a flattened spheroid, which became a basis for his Manifesto of Correalism.

One of his main arguments for the derivation of the shape is that it is based on a lighting system; a shape that would allow ample light to reach every corner of the room without being broken up by corners and interior walls of a conventional building.

"All ends meet in the "Endless" as they meet in life. Life's rhythms are cyclical. All ends of living meet during twenty-four hours, during a week, a lifetime. They touch one another with the kiss of time. They shake hands, stay, say goodbye, return through the same or other doors, come and go through multi-links, secretive or obvious, or through the whims of memory."

A main criticism of Kiesler is the discordance between the ambitious and unique potential of his models and the very static architectural drawings.

His sketches work well to maintain the visions he discusses, but as soon as he begins to make "rigid" the un-rigid lines and surfaces he loses sight of what he is after. The models show flowing transitions through spaces, with internal stairs, interiority and exteriority, and continuous surfaces.

Sketches, sample models and descriptions show the projected materiality of the house; reinforced concrete on a wire mesh. The windows would be covered with a semi-transparent molded plastic, forming irregular shaped apertures. Bathing pools would replace conventional bath tubs and would be found scattered throughout the house.

Textures of the flooring varied a lot; the range including pebbles, sand, rivulets of water, grass, planks, and heated terra-cotta tiles.

An exhibit on the "Endless House" was featured at The Museum of Modern Art from 1958-1959. This featured models and photographs of the modeling process, as well as the unorthodox architectural drawings that he called "polydimensional," often compared to Surrealist atomatic drawings. The MOMA commissioned Kiesler to create a full scale prototype of his Endless House for the museum garden, where it would stay for two years. Unfortunately this was never completed, so the study models, drawings and photographs were the only items presented.

Kiesler spent a lot of his time as a theater and art-exhibition designer in Vienna during the 1920s, and around the same time he briefly collaborated with architect Adolf Loos. In 1923 he became a member of the De Stijl group. These relationships may have influenced in his approach to artistic theories and practices, which were often found heretical and bizarre.

During the period of 1937 to 1943, Kiesler was a member of the faculty in the Department of Architecture at Columbia University, where the program was geared towards teaching more pragmatic and commercially oriented architecture. This was very different from the areas of design he grounded his ideas in; theoretical concepts and ideas concerning the relationship among space, people, objects and concepts, known as "correalism" or "continuity." 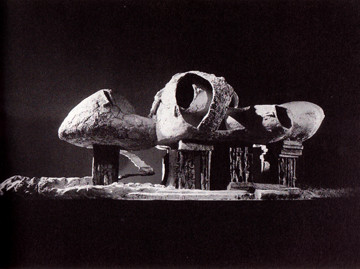