The recently unveiled renderings for the Mashouf Performing Arts Center at San Francisco State University (SFSU), feature not just one new building but five performance spaces linked through a series of transparent hallways and classrooms. Michael Maltzan Architecture, the designers behind the new Arts Center garnered the commission ahead of six shortlisted firms including Diller Scofidio + Renfro.

“The building is almost like a city. It is meant to act like a small campus with those spaces and connective elements,” said Maltzan. “There’s one continuous horizontal layer, which connects across the entire project and many different disciplines. With informal as well as formal spots, in the choreography of that mix, you create the culture of the college.”

The architects were inspired by the triangular site and its slanted lines, which they chose to repeat throughout the overall design and details of the buildings. This repetition can be seen in a series of sloping balconies within the primary performance space and the triangular shaped courtyards that are exterior connections between the buildings.

More details about this newly unveiled design and renderings following the break. 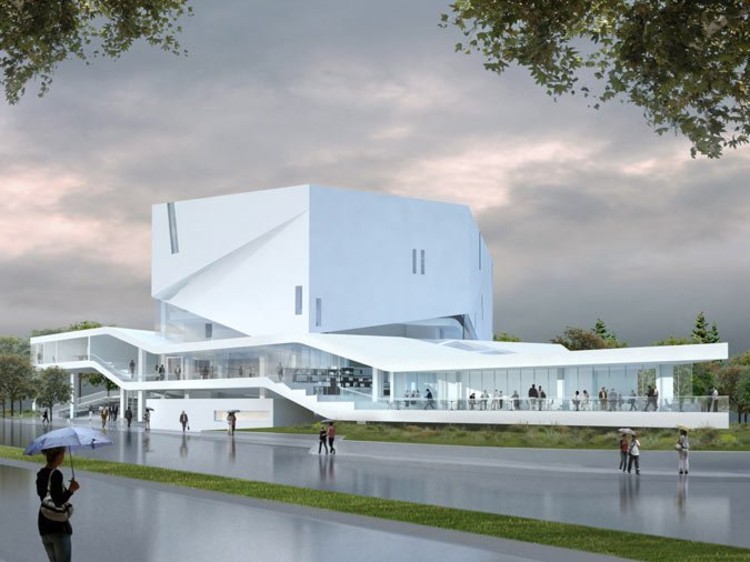 A 1,200 seat opera style theater is planned within the first phase of construction, and four smaller theaters will follow in two additional phases. The total 242,000 sqf Mashouf Performing Arts Center will also include programs for drama, dance, music, and broadcast journalism.

The $250 million performance education center is anticipating LEED Gold certification, hoping to break ground by 2013. This ambitious Art Center will first require 18.5 million to begin the first phase of construction (the school has already raised $12 million), and would like to complete all phases of construction within a nine year period.

“We knew we needed to build a new classroom space, but we also wanted a calling card to solicit partnerships with public arts institutions. It needed to be an iconic building, and we had a real mandate to look for someone very forward-thinking about the arts and nonprofits in general,” shared Kurt Dawn, Dean of the College of Creative Arts.

Source: Great Performances in San Francisco by Lydia Lee in The Architect’s Newspaper