Text description provided by the architects. Widely recognized for his emphasis on color, light, shadow, form and texture, it can only be expected that the former residence of Pritzker Prize winner Luis Barragan encompasses all of his trademarks. On its street in Mexico City, the stark facade of the house humbly blends in with its neighbors, giving no hints to the personality of it's interior.

The most prominent aspects of the design of Casa Barragan are the use of flat planes and light, both natural and artificial. The skylights and windows allow for visual tracking of light throughout the day; the floods of natural light and views of nature are the key purposes of the windows. Opening up into the garden, the back of the house creates a visible and physical relationship between the lower level and the backyard. Barragan often called himself a landscape architect because he placed as much emphasis on the exterior and surroundings of a building as he did on the interior.

Upon entering, the visitor walks down a dark hallway until they suddenly encounter a pink wall, the first engagement with the known style of Barragan. The only function of this main room is to use the telephone, but it is still characteristically lit and decorated with simply a chair and a table, neither of which have changed location in the last 50 years. The double height space of the main room is separated only by lower partition walls, which separate the space into different areas. On the roof, a window is accentuated by the use of wooden girders.

The play of privacy and visibility are seen throughout the front and back halves of the house. Towards the front, high windows are used to let light in but maintain privacy, whereas large windows open up the back to the garden. Since the back of the house opens up to private space as opposed to the public street at the front of the house, Barragan is able to manipulate the windows accordingly.

Barragan had a fascination with animals, particularly horses, so many relics of popular culture and symbols are found throughout the house. Crosses can also be found in multiple rooms, which, coupled with the bold colors used by Barragan, create a mythical and spiritual architecture. He found many of his furnishings at craft markets and antique shops, all true to the cultural identity of Mexico. This cultural flare is also apparent in the bold pink, yellow and lilac colors chosen by the architect. The minimalist style gives reason to the significance of detail, every aspect of the house has it's purpose and is obviously planned by the architect.

The purist of stairs lead visitors through the other stories of the house, towards private bedroom and studio spaces. The colors and simplistic designs are carried out throughout each level, even out onto the terraces and roof. Barragan discovers a poetry in architecture, straying from the standard and conventional line and creating a unique style that distinguishes who he is as a person and architect. He fuses his personal experiences, dreams and memories into a physical experience that is shared throughout cultures and ages.

Luis Barragan accepted the Pritzker Prize in 1980. Upon his death in 1988, Casa Barragan became a museum to be enjoyed by the public. The house became one of UNESCO's World Heritage sites in 2004. 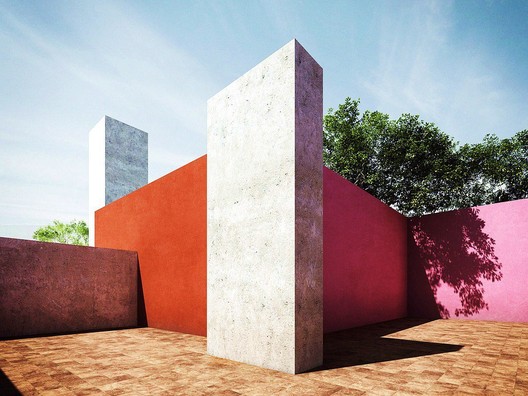