Would You Spend $145,000 on Zaha Hadid Architects' Lapella Chair?

For those with $145,000 hidden down the side of their sofa, Zaha Hadid Architects has designed and released Lapella Chair, continuing their “investigations in structure and fabrication-aware tectonics by reinterpreting the iconic 1963 lounge chair by Hans J. Wegner." 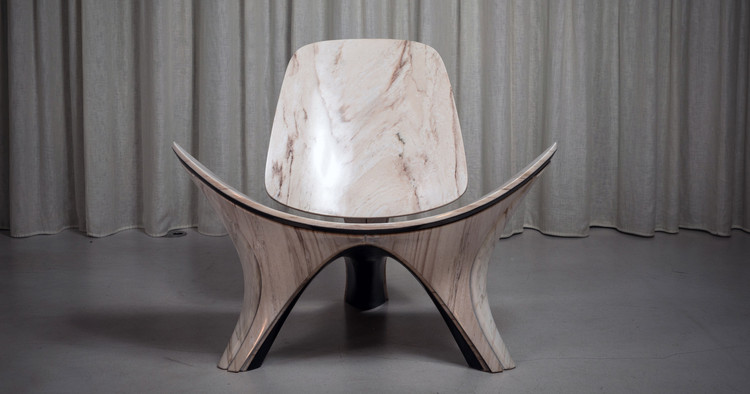 Will Carbon Fiber Revolutionize Architecture as Steel Did in the 19th Century?

This article was originally published by Autodesk's Redshift publication as "Could Carbon Fiber Be the Superhero of Building Materials?"

On any weekday, Chicago’s downtown business district, the Loop, teems with harried humans crossing the street like herds of wild antelope fleeing a predator. Most scurry past the Field Building without considering its significance—or that of the historic building demolished in 1931 on the same site: the Home Insurance Building. Built in 1884, it was the first tall building erected on a frame made of structural steel—a light, affordable, and durable material that allowed structures to be built taller, stronger, and faster than those made of wood or stone.

A building’s materiality is what our bodies make direct contact with; the cold metal handle, the warm wooden wall, and the hard glass window would all create an entirely different atmosphere if they were, say, a hard glass handle, a cold metal wall and a warm wooden window (which with KTH’s new translucent wood, is not as absurd as it might sound). Materiality is of just as much importance as form, function and location—or rather, inseparable from all three.

Here we’ve compiled a selection of 16 materials that should be part of the design vocabulary of all architects, ranging from the very familiar (such as concrete and steel) to materials which may be unknown for some of our readers, as well as links to comprehensive resources to learn more about many of them.

The Steel Age Is Over. Has The Next Age Begun?

Andrew Carnegie once said, “Aim for the highest.” He followed his own advice. The powerful 19th century steel magnate had the foresight to build a bridge spanning the Mississippi river, a total of 6442 feet. In 1874, the primary structural material was iron — steel was the new kid on the block. People were wary of steel, scared of it even. It was an unproven alloy.

Nevertheless, after the completion of Eads Bridge in St. Louis, Andrew Carnegie generated a publicity stunt to prove steel was in fact a viable building material. A popular superstition of the day stated that an elephant would not cross an unstable bridge. On opening day, a confident Carnegie, the people of St. Louis and a four-ton elephant proceeded to cross the bridge. The elephant was met on the other side with pompous fanfare. What ensued was the greatest vertical building boom in American history, with Chicago and New York pioneering the cause. That’s right people; you can thank an adrenaline-junkie elephant for changing American opinion on the safety of steel construction.

So if steel replaced iron - as iron replaced bronze and bronze, copper -  what will replace steel? Carbon Fiber.