The Brick Award recognises and celebrates exceptional brick architecture from around the world. It creates a platform for architects and planners to present their innovative and creative projects and designs to an international audience.

Architecture can achieve great things and unite cultures and nature, as demonstrated by the outstanding buildings that won the International Brick Award 22. For the tenth time, Wienerberger shone the spotlight on exceptional brick building projects from all over the world. The aim of the Brick Award is to act as a torch bearer and source of inspiration for architecture, planning, urban development and culture. The 50 nominated projects also demonstrate the aesthetic and functional potential of ceramic building materials.

The project selection process focuses on certain specific criteria and five specialist categories. The most important criteria is that a significant part of the project must consist of clay building materials, such as clay blocks, clay facing bricks, clay paving bricks, clay roof tiles or clay façade panels. The building could be a new build, renovation or conversion project, and the bricks can be new or reused. In particular, the jury looks at how projects combine functionality, sustainability and energy efficiency. Although Wienerberger is the sponsor of the Brick Award, there is no requirement for participants to use Wienerberger products in the projects. The following pages present both the outstanding winners in each category and the eminent jury that chose them. You can view all the nominated projects and find further information here.

The city of Jingdezhen in China has a significant history of porcelain production.

The Imperial Kiln Museum was planned by Studio Zhu Pei, right next to the ruins of the Ming dynasty imperial kiln. Eight parabolic brick vaults form the museum complex, including two ground-level and five underground exhibition halls. The cigar-shaped vaults are all slightly different in height, length and curvature, and were modelled on the forms of traditional kilns. They are arranged side by side on the site in a slightly higgledy-piggledy cluster with a roughly north-south orientation. The buildings are interposed by courtyards that let daylight flood into the basements. On the upper floors, light falls through the open or glazed vault ends, through horizontal light slots above the floor, through chinks in the walls and through skylights that resemble kiln smoke holes.

The museum's construction also references the city's porcelain heritage: The vaults consist of double-shell brick walls built in the traditional manner and then filled with concrete. The 2.8 million bricks used here are a mixture of new and reclaimed bricks left over from the demolition of kilns. Thus, this extraordinary project offers everything required of a public space and thoroughly deserved to be the winner, not only of the Sharing public spaces category, but also of the Grand Prize.

The House that Inhabits

The architecture collective Natura Futura regards The House that Inhabits, located in Babahoyo, Ecuador, as a statement: a statement that not only opposes the commercialisation of the city, which marginalises many people, but also one that gives brick a symbolic as well as a building material function. This traditional building material is often assigned to poorer sections of the population – it is often concealed, plastered and painted over. The architects want this project to demonstrate and explore the value of bricks as a material for a vibrant, habitable city.

The building harks back to the traditional houses of the Latin American city, still commonly seen in Babahoyo, and makes full use of the thirty-by-twelve-meter plot of land. There is commercial space on the ground floor and an apartment and five rooms housing an educational institution on the upper floor. Strips of skylights and a narrow corridor along the outer walls let in daylight. The roof structure is made of wood – another material associated with poverty.

The scope of this project extends far beyond the building envelope. It draws attention to small initiatives that broaden the definition of mixed-use buildings and so make a positive contribution to the quality of urban life in the centre of a modern city. The combination of unorthodox spatial organisation and the chosen materials makes The House that Inhabits a true statement of belief.

In Pantin, a northeaster suburb of Paris, France, Avenier Cornejo Architectes have erected three buildings beside the Canal de l'Ourcq. They contain a total of 88 flats, are arranged in a semicircle and enclose a small courtyard that opens onto the canal.

The third block is located on the west side of the street: it has one additional storey and commercial space on the ground floor. All three buildings have roughly the same proportions, but the design of each is determined by the shape of the plot and their orientation towards the canal.

Hand-moulded bricks have been laid in stretcher bond with hollow joints. The window sections are set in contrasting Flemish bond with the header bricks somewhat recessed to create a relief effect. The architects selected their three brick colours as a modern response to the pale yellow of the Grands Moulins de Pantin flour mills, built in 1884, and located just a little further west along the canal. The metal used for the window frames and railings is also a different colour on every block: red brick is complemented by grey metal details, light grey bricks by green, and dark grey bricks by brown. The same bricks were also used to pave the path that meanders through the old trees in the garden. The ensemble is a successful synthesis of unity and diversity.

The name 2226 Emmenweid comes from the building technology concept, which ensures a stable indoor temperature between 22 and 26 degrees Celsius. The new four-storey building designed by Baumschlager Eberle Architekten in Emmenbrücke, Switzerland, stands out with its light lime plaster and regular arrangement of generous windows set deep in the walls. Its bulk is emphasised by a hipped roof with flush edges. A recessed section in the façade creates a striking horizontal line that gives structure to the massive block and establishes a relationship with the neighbouring buildings.

The floor plan concept is simple and designed to accommodate a wide variety of uses. The inner core contains stairs, sanitary facilities and kitchenettes. This is surrounded by a broad multipurpose area with no load-bearing partition walls that can be flexibly configured for different uses. The wall construction consists of two layers of bricks, each 36.5 cm thick: one is a load-bearing and insulating wall, the other is insulation. Unfilled large brick blocks were used, which ensure efficient vapour diffusion and have a high thermal mass that contributes significantly to the stability of the indoor climate.

In addition to its spatial and atmospheric qualities, 2226 Emmenweid demonstrates that a new way of thinking is possible in commercial office construction – a way of thinking that focuses on the factor of time in overcoming the customs of the mechanical age: a long service life and year-round as well as all-day climate stability.

This site used to be home to fishermen and farmers. Before construction began, it contained a warehouse and several small cottages. At the client's request, these structures were partially preserved by Neri&Hu and influence the identity of the project. The designers succeeded in merging the cottages with a luxury hotel by referencing Chinese traditional architecture.

A grid was laid across the site, echoing traditional Chinese courtyard houses and integrating the existing buildings. With the exception of a two-storey courtyard house that contains the library and some guest rooms, all the buildings within the matrix are single-storey. The brick walls envelop all functional areas, including the four gardens. The brickwork is partly closed and partly open. Apertures in the wall offer a succession of views into the various patios of the reception area, restaurant and guest rooms. As you walk through the building, multifaceted spaces and choreographed views of inner and outer landscapes open up – connecting the sky and the Earth. This winning project in the Building outside the box category references the traditional architecture of the region. However, it also shows a strong commitment to sustainability and environmental responsibility by recycling and reusing reclaimed bricks. 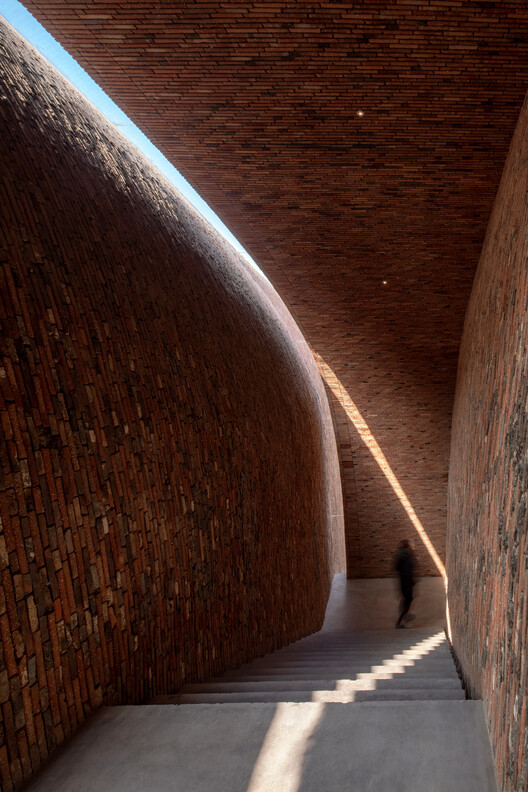