Save
The City Beyond Architecture. Sheng-Yuan Huang and the work of Fieldoffice Architects in Yilan, Taiwan.
Share
Or
Copy

The world of today is changing. The center of development has moved to Asia, where more than half of the world’s urban population is already living. In the future, Asian settlements will outnumber those of other continents. And, most interestingly, the Far East’s urbanization has nothing to do with what happened in the West, where suburbanism has finally come to dominate the landscape and the lives of most people. In Asia, activities are all mixed, and one can find agricultural production sitting side by side with housing, temples, or high-tech factories. It is a new kind of mixitè and, if properly managed, it looks the like of something more sustainable than a European or American periphery.

In this context, there is another thing that just started to develop. It is a public space capable of structuring this particular landscape and provide both social spaces and a sense of identity to the place. In a way, it is developing what landscape urbanism has been theorizing for some time. But here, it is a concrete matter, especially in places the like of Taiwan, where some form of public participation in politics is possible. It is the like what happened at the onset of the Tessiner architecture school in South Switzerland, or the times of the Barcelona Olympics in Catalunya, those unique occurrences of city-making where innovations of planning or design have been put forward and shaped new forms of urbanism. But here, it is something that ‘resonates’ with what most of the future urban world may be.

Sheng-Yuan Huang and his colleagues of Fieldoffice are the avant-garde of this architectural movement, which is producing a new form of collective living in terms of design and culture. They are also those that somehow test new planning and design systems, i.e., experiments from where we can learn about what the Asian city and landscape may be. In the light of it, this book is a first attempt to frame the work of Fieldoffice in terms of city-making, but also highlight those aspects of the urban design process that can offer reference to planners and designers around the world. Indeed, ultimately, the work of Sheng-Yuan Huang and Fieldoffice is a reflection on what any real city is.

Interview 2b
More than a year in Fieldoffice
Jimmy Chen, architect at Fieldoffice
page 149 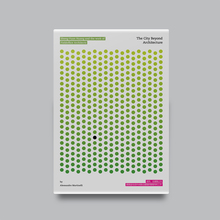 The City Beyond Architecture. Sheng-Yuan Huang and the work of Fieldoffice Architects in Yilan, Taiwan.
Buy now