Shaped Places of Carroll County, New Hampshire expands upon an award-winning speculative urban design project by the architecture and design practice EXTENTS, led by McLain Clutter and Cyrus Peñarroyo. The project investigates the complex reciprocity between who we are and the shape of where we live; between identities and the built environments that support them. In doing so, Shaped Places creates a dialogue between seemingly disparate discourses spanning from critical geography, to formalist art criticism, to the urbanization strategies of the early twentieth-century Russian avant garde. The role of the rural-urban divide in affirming the divided political landscape in the United States is a central theme in the work. The project culminates in the design of three linear cities in Carroll County, New Hampshire. In each speculative urban design proposal, rural and urban patterns of development and divergent lifestyles are combined in urban design proposals intended to produce a functional body politic from a sharply divided population. 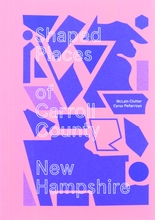