MASTERcrit was inaugurated in 2015 as a hybrid series of events that encompassed lectures, critiques and a charrette. Modeled on the traditional notion of a “Master Class” the workshop enlisted the best graduating students from the school as nominated by the faculty to work in an intensive pedagogic setting with a world-class practitioner. The so-called invited “MASTERcritics” were MOS in 2015, Andrew Zago in 2016, and Jürgen Mayer H. in 2017. In all cases, these architects were tasked with presenting a project brief to the team, which reflected a current pre-occupation in their own discursive production. Students in turn were asked to produce artifacts that manifested their responses. In addition to documentation of the workshops and resultant work, the book includes the briefs and transcripts of conversations. 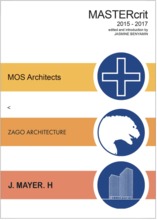