Save
Skyroom The Journey of Brian and Marilyn MacKay-Lyons at Shobac, a Seaside Village on the Edge of Architectural and Utopian Possibility
Share
Or
Copy

As you crest the ridge, the green valley below and the ocean beyond come into view. This is Shobac, a seaside village featuring an ensemble of buildings that, on first glance, looks like a monumental work of Land Art. What is this place? A fishing village from the future? A monastery teleported here from another planet? A utopian colony with a message for the world?

Shobac is recognized internationally as the masterwork of famed Canadian architect Brian Mackay-Lyons. In partnership with his wife Marilyn Mackay-Lyons and their family, he has built a unique community over the granite ruins of a historic settlement on the fogbound coast of Nova Scotia, an area identified on Champlain’s first map of North America from 1604. Among the structures at Shobac are homes, barns, studios, cottages, fishing shacks, a boathouse, even a schoolhouse, all designed in Mackay-Lyons’s sublime architectural language that fuses contemporary Modernism with Nova Scotia building traditions.

In SkyRoom, novelist Larry Gaudet tells the Shobac story in a new genre that he calls magic architectural realism, blending fact with historical fiction in presenting the lives of early inhabitants and visitors to the area, including Champlain, a Mi’kmaq mystic, an Acadian carpenter and other lively characters whose ghostly presence swirl in the untold myths of this coastal Shangri-La.

More provocatively, Gaudet orchestrates imaginary conversations between Mackay-Lyons and legendary figures in architecture – Frank Lloyd Wright, Mies Van Der Rohe, Louis Kahn, Charles Moore and others – all towards providing a novel perspective on what goes into building communities and homes worth living in. SkyRoom also addresses an undiagnosed problem of consequence in our culture: widespread architectural illiteracy, the impact of which seeds the landscape in ugliness, consumes resources unsustainably, and ultimately degrades community and individual wellbeing.

As Gaudet tells it, Shobac draws worthy comparisons to other experimental communities built by architects and artists of the first rank: Wright’s Taliesen compounds, Donald Judd’s art sanctuary in Marfa, Texas and Sea Ranch in California associated with Moore. Like these world-renowned architectural monuments, Shobac is revealed as the heritage of tomorrow deserving our appreciation today. 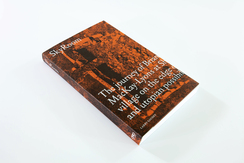 Skyroom The Journey of Brian and Marilyn MacKay-Lyons at Shobac, a Seaside Village on the Edge of Architectural and Utopian Possibility
Buy now
Share
Or
Copy

Architecture BooksBuildingsLandmarks & Monuments
Cite: "Skyroom The Journey of Brian and Marilyn MacKay-Lyons at Shobac, a Seaside Village on the Edge of Architectural and Utopian Possibility" 09 Nov 2021. ArchDaily. Accessed . <https://www.archdaily.com/971558/skyroom-the-journey-of-brian-and-marilyn-mackay-lyons-at-shobac-a-seaside-village-on-the-edge-of-architectural-and-utopian-possibility> ISSN 0719-8884