Save
Introducing: Short Essays on Influential Thinkers and Designers in Architecture
Share
Or
Copy

In the post-Internet architectural climate, critical discourse historically found in the pages of institutionally backed journals has been overshadowed by a culture of abundant, shorter media. As traditional means of disseminating information has lost support, e-magazines, which are typically segregated from, if not entirely in opposition to, the academy and its requisite polemics, have risen in popularity. The question stands as to whether architectural discourse has the resilience to deal with the speed of new media, and if it does, in what form that discourse might be delivered and relevant.

Introducing, Short Essays on Influential Thinkers and Designers in Architecture—a collection of 18 short essays developed by designer and educator David Erdman—suggests that short-form writing might serve as the proper vehicle for architectural discourse to flourish in the 21st century. Speculating that concise pieces of information attributed to the blogging and tweeting generation of architects is the contemporary format for the delivery of critical discourse, Erdman uses his essays to illustrate how an iterative approach to short-form writing might be the most efficient way for architecture to open new critical dialogues. Introducing further suggests that discourse is no longer (and will not be in the near future) delivered in extended, holistic polemical packages. Instead, Erdman posits that precise, undiluted snippets of discourse, which can be formed into broader strains of thinking by the user, or audience, simulate an “open source” information platform that is adept to the contemporary subject and architectural discipline, would be more suitable. 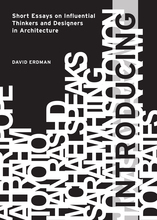