Save
Call for Entries: 2 landscape and urban design projects, on new urban metabolisms
Share
Or
Copy

The Europan 16 topic focuses on living cities as a new paradigm, in which new kinds of synergies can be considered between the environmental, biological, social, economic, cultural and political dimensions.
This paradigm leads us to think in terms of co-evolution and interactions, and to work with regenerative project dynamics, combining metabolic and inclusive vitalities.
The italian cities of Bitonto and San Donà Venezia are looking for ideas to implement a strategic urban revitalization project and intend to start a process of implementation with the awarded teams.

PROJECT SITES IN BITONTO
The site consists of the squares system of Bitonto, Palombaio and Mariotto. The strength of the hamlets (7 and 11 km away from the center) is their rural context and their access position to the Alta Murgia Park. But there are also some critical issues related to isolation from the center of Bitonto. It is necessary to activate a new development, based on alternative energy sources, on life in the open air and on local values to be related to the center of Bitonto. The naturalistic path, from the Lama Balice towards the Alta Murgia Park, using sections of via Cela, represents the strategic site, a catalyst element for the activation of new functions for the natural environment, which will bring benefits to the hamlets at the cultural, social and economic level.
The distance between the city and the hamlets will be reduced by the ability of the Europan project to make the values of each urban center dialogue in order to build a territorial value. The definition of the nature trail, under construction, from the Lama Balice Park to the Alta Murgia National Park, is an opportunity to generate new urban / territorial metabolisms.

PROJECT SITE IN SAN DONA’ VENEZIA
The ATVO bus station, project site, in the historic center of the city is destined for transfer to the new Porta Nuova hub, under construction, about 1.2 km away.
It will be necessary to think of new functions and services that take into account its strategic position and economic impact, for commercial activities in the urban center which until now have been consolidated according to the current mobility flows.
The Europan proposals will have to promote the strengthening of the urban center in relation to the development axis that crosses it and that connects the Vittoria bridge along the Piave River, up to the new intermodal hub of Porta Nuova. This path is marked by some spaces in the regeneration phase. The site will be strategic to activate new metabolisms that include the city center, enhancing the dialogue with the new polarities and promoting widespread sociality and new forms of economy The identification of a process such as that of Europan is aimed at the participation and involvement of all actors interested in urban development to make the city attractive and dynamic. The opportunity offered by the competition site, promoted by the City of San Donà and ATVO, which have made available to citizens a strategic area, will be able to create new metabolisms in continuity with the new mobility pole and able to integrate with river axis of the Piave, a true meeting point for communities and for the history of the city. 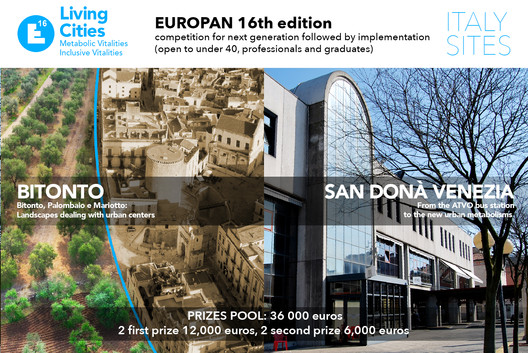