JKMM Architects’ Amos Rex Art Museum set a new standard for what an art museum can be, redefining the museum as a space for both art and social interaction, whilst at the same time presenting an innovative and exciting architectural experience in the centre of Helsinki that actively invites public participation.

Faced with a challenging urban site that included the 1936 Functionalist Lasipalatsi (“Glass Palace”) and its adjoining square, the architects’ masterstroke was to insert the new Amos Rex galleries below the two, allowing the museum’s street-level roof to continue to serve as a public space. Skylights appear as a series of undulating hills, hinting at the gallery spaces below and adding a contemporary historical layer that distinguishes the new building from its surroundings.

The architectural encounter that begins in the outdoor square continues in the dramatic, yet flexible, exhibition spaces within the museum. In this way, Amos Rex is an engaging and generous intervention into the city centre.

This publication, edited by architect and critic Tomas Lauri, details the project through texts, photographs and drawings. Essays include an in-depth conversation between JKMM’s Asmo Jaaksi and Amos Rex Director Kai Kartio that tells the building’s story from the first sketch to the museum’s opening in 2018. Also included is a text by Lars Nittve, curator and former director of Tate Modern, Moderna Museet, Louisiana Museum of Modern Art and, most recently, M+ in Hong Kong. The book is the first in the series New Nordic Architecture, which highlights single pioneering works and the architects behind them.

OUTSIDE IN: NOTHING LIKE IT ANYWHERE
Kai Kartio and Asmo Jaaksi

INSIDE OUT: A STEP INTO ANOTHER WORLD
Tomas Lauri 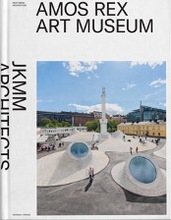