Save
Almost, Not: The Architecture of Atelier Nishikata
Share
Or
Copy

Almost, Not: The Architecture of Atelier Nishikata is the story of a remarkable architecture practice in Tokyo. Partners Reiko Nishio and Hirohito Ono have built just four residential works, until now remaining little-known outside of Japan. But the extraordinary, almost-ordinary quality of their work warrants the spotlight. It has much to teach students of architecture and experienced architects alike.

This book is a hybrid between an architectural monograph and a magic instruction book. Author Leslie Van Duzer, a former magician’s assistant and author of four monographs on 20th-century architecture, draws parallels between the effects and methods of architects and magicians.

The introductory essay, “Almost, Not,” presents an overview of Atelier Nishikata’s approach, describing the effects engendered by their architecture and the methods behind the them. The essay is followed by four detailed project descriptions that elaborate on the strategies behind the work. These texts are richly illustrated with process work, diagrams, detailed drawings, and photographs, including before and after views of the renovated spaces, and views post-inhabitation. The volume closes with a lengthy interview with the architects to help flesh out the methods behind their madness. 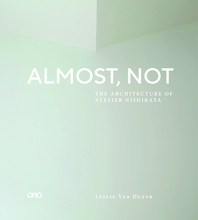 Almost, Not: The Architecture of Atelier Nishikata
Buy now
Share
Or
Copy