Save
Monotowns: Soviet Landscapes of Post-Industrial Russia
Share
Or
Copy

A photographic exploration of the Soviet monotowns − urban settlements erected around single industries in the hinterlands of the former USSR −; some thriving, others struggling to survive, still others partially abandoned.
Through nine chapters with over 130 photographs taken by Russian photographer Alexander Veryovkin, Monotowns by Zupagrafika captures the post-industrial landscapes and Soviet-era architecture of the monogorods extending from the Arctic Circle to the Russian Far East, such as Vorkuta, Norilsk, Mirny, Kirovsk, Tolyatti, Cherepovets, Magnitogorsk, Monchegorsk and Nikel, and the daily lives of their inhabitants.

Includes informative texts providing a valuable insight into the urban development of the featured cities and a foreword by the architectural critic Konstantin Budarin.

‍‘The Soviet economy was organized according to five-year plans, with the whole country operating like an enormous corporation. Monotowns were like different departments within this corporation.’‍‍
– Excerpt from the foreword 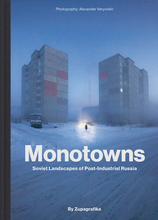