Carl Pruscha is an unusual architect. His works are found in New York, Kathmandu, and Vienna. Far removed from each other, these three geographical areas profoundly influenced his outlook and career. In the United States Pruscha planned visionary and utopian projects. He began to deal with the real world in Nepal where the UN had sent him as a consultant in 1964. In this foreign culture the young architect grew with the challenge. Aside from complex development proposals for the Kathmandu Valley he created remarkable buildings that blend tradition and Modernism in close harmony with their natural and landscape environment.

In this book essays by Manjushree Thapa and Natalie Lettner, a memoir by Michael Sorkin, photographic documentations by Iwan Baan and Hertha Hurnaus along with portfolios of Pruscha’s projects cover his eventful life and extraordinary work. 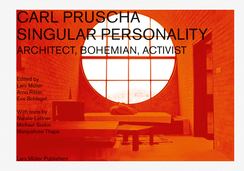