Save
20th CENTURY INDIAN ARCHITECTURE: Genesis and Metamorphosis of Modernism
Share
Or
Copy

India has an extraordinarily rich architectural history and a great variety of current professional practices in this field. Understanding them enriches the study of architecture everywhere. This book “20th CENTURY INDIAN ARCHITECTURE: Genesis and Metamorphosis of Modernism” focuses on describing the variety of ideas that shaped the architecture of India in the 20th century. 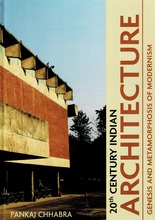