Save
John S. Chase – The Chase Residence
Share
Or
Copy

In 1959 the American architect John Saunders Chase completed a radical work in Houston: a modernist house for his own family. No architect would hire Chase for the necessary professional internship when he – the first African American to enroll in and graduate from the University of Texas School of Architecture – arrived there in 1952. He instead had to petition the state for special permission to take the licensing exam, and he became the first African American registered as an architect in Texas. Yet by 1959 Chase had worked his way to a position of remarkable influence in the cultural, political, social, and economic life in Houston. His progressive house was testimony to this accomplishment. Its architectural form was equally radical, the first fully enclosed courtyard house – a building type only initially experimented with by progressive architects across America at that time – in Houston. Notorious but not well known, the Chase Residence, in both its original version and after a fundamental alteration undertaken in 1968, is an ongoing experiment in how a family might live. This beautifully illustrated book tells the story of the house, describes how its architecture frames experience, and places the house within the larger context of Chase’s career and times 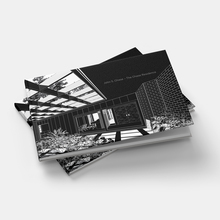