Save
Magnetic City: A Walking Companion to New York
Share
Or
Copy

Description via Amazon. From New York magazine’s architecture critic, a walking and reading guide to New York City—a historical, cultural, architectural, and personal approach to seven neighborhoods throughout Manhattan, Brooklyn, and the Bronx, including six essays that help us understand the evolution of the city.

For nearly a decade, Pulitzer Prize-winning critic Justin Davidson has explained the ever-changing city of New York to his readers at New York magazine, introducing new buildings, interviewing architects, tracking the way the transforming urban landscape shapes who New Yorkers are. Now, his extensive, inspiring knowledge will be available to a wide audience. An insider’s guide to the architecture and planning of New York that includes maps, photographs, and original insights from the men and women who built the city and lived in it—its designers, visionaries, artists, writers—Magnetic City offers first-time visitors and lifelong residents a new way to see New York. Includes walking tours throughout Manhattan, Brooklyn, and the Bronx, the Financial District, the World Trade Center, the Seaport and the Brooklyn waterfront, Chelsea and the High Line, 42nd Street, the Upper West Side, the South Bronx and Sugar Hill

“In this exquisitely crafted book, Justin Davidson does more than direct our feet to New York's hidden monuments.  He explains the structure of the city with a clarity that would be bracing even for a Gotham habitué, but more than that, he finds the meaning in every building and byway.  If you already love the city, you will love it more after this book; if you have not yet fallen prey to its charms, these eloquent narratives will seduce you in.  It would be glorious to go on the walks Davidson prescribes, but even those who read the book in an armchair a thousand miles away will be swept up by this evocative, pellucid, charming, and exuberant paean to the city that never sleeps.”—Andrew Solomon, National Book Award-winning author of Far from the Tree

“For those of us who primarily work in the city, we leave home, take the most direct route to our place of employment, and rarely look up or down, just straight ahead. We don’t see the environment we live in. Magnetic City changed that for me. Now I don’t want to go to work. I want to read any chapter in Justin Davidson’s absorbing book and get my walking shoes on. Mr. Davidson’s exceptional knowledge of our beloved city is inspiring. Magnetic City is now my official chaperone.”—Patti LuPone“Justin Davidson has a mind alive to every signal, and his brilliant prose style transmits that electricity in black-and-white type. He is thus born to the task of capturing the chaotic splendor of New York City on the page.”—Alex Ross, author of Listen to This

“Justin Davidson’s beautiful tours of New York City invoke and redouble our love of the metropolis. His observations of landmarks, in-between places, and layered histories, delivered by an amazing kindred-spirit of architecture, make us feel like royal presences in the city.”—Jerry Saltz, senior art critic, New York

“A fascinating and insightful companion for a walking tour of New York City. I particularly enjoyed the rich interweaving of the contemporary and the historical. A book worthy of the 21st century flaneur!”—Daniel Libeskind 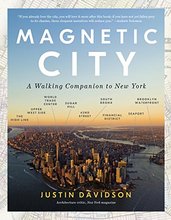