Save
"Pyongyang Architecture Map" by Oliver Wainwright
Share
Or
Copy

The Pyongyang Architecture Map follows Blue Crow Media's successful previous guides with its mixed of expertise and affordability. It is a two-sided, bilingual guide including a map of Pyongyang, an introduction and photographs by the Guardian’s architecture and design critic Oliver Wainwright, and details of over fifty selected buildings.

Blue Crow Media’s twenty-sixth 20th century architecture guide map, it offers insight into the North Korean capital’s surprising range of architecture. The buildings included on the map, built from 1948 to today, reflect the principles of North Korea's three leaders since the end of the Korean War: the distinctive socialist-realism under Kim Il Sung, an expressive modernisation under Kim Jong Il and today's socialist fairyland of Kim Jong Un. The map presents an architectural city unlike any elsewhere.

Wainwright writes in the map’s introduction, “Pyongyang is a place of surprisingly original architecture, from the billowing silvery shells of the May Day Stadium, to apartment towers rendered in distinctive pastel colours. It is an astonishing time capsule, cut off from the outside world for the past 70 years... [Pyongyang] is a highly theatrical, stage-like city: walking the streets feels like moving through a series of sets taken from one of the country’s socialist-realist operas.”

The bilingual, Northern style Korean and English, map serves as an expertly curated guide and an introduction to Pyongyang’s unique architecture.

With many of our travel plans on hold, this is the ultimate publication for the pandemic era's armchair traveller. 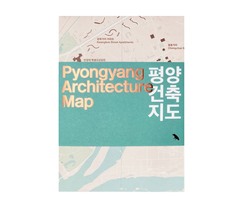