Save
The Ďáblice Housing Estate: Architecture for the People
Share
Or
Copy

The book The Ďáblice Housing Estate: Architecture for the People is dedicated to one of the most successful housing estates in the Czech Republic, lying in the northern section of Prague near the hill of Ládví and the Ďáblice Forest.

The Ďáblice estate is marked by a truly outstanding urban plan for the entire complex, combining a diverse composition of several distinct types of housing blocks with sensitively integrated structures for public services. Moreover, an independently significant component of the urban conception is provided by the landscape design for the entire complex, dominated by the elongated central park, and the use of objects of public artwork. Ďáblice forms part of the broader construction project known as “North Town” (Severní Město), consisting of the urban complexes of Bohnice, Kobylisy, Ďáblice and Prosek.

The final form of Ďáblice is the outcome of the winning competition entry by Jiří Novotný and Vlastimil Durdík from 1962—1963, later re–worked by architects Josef Polák and Vojtěch Šalda and eventually the chief architect of the entire complex, Viktor Tuček from the Prague Design Institute. Construction of the estate commenced through preparation of the technical and transport infrastructure in 1968, while construction of residential blocks and public areas started in 1969, with housing construction completed in six stages by 1975 and ancillary facilities finished in 1978. The final building project was the cultural centre, completed only in 1983. Investment was provided by the state enterprise “City of Prague Construction” (Výstavba hlavního města Prahy) from its housing–estate division. The residential blocks were built by “Assembled Constructions Prague” (Montované stavby Praha), components for residential buildings were supplied by Prefa Praha, and the utility networks as well as public structures were completed by the state enterprise Konstruktiva. In total, the estate provided up to 9,500 flats for 27,500 residents.

Compositionally, the Ďáblice estate is formed by several lengthwise strips in which the same type of apartment block is employed. As for the various block styles, we find a combination of slab, tower, point, terraced and galleried structures, with one entirely unique innovation — the three high–rise blocks with protruding terraced (cascading) units on the lower floors. Planning the authorial design of the apartment blocks was formulated on several levels. On the urban–planning level, larger groups of similarly designed housing structures were the central factor; architecturally, however, the individual housing types were given an independent character corresponding to their position and significance in the wider ensemble. All the buildings were constructed using the prefabricated concrete–panel sets then in common use: T 08 B, T 06 B and VVÚ-ETA. A major advantage of Ďáblice is its extensive network of public facilities: schools, kindergartens, retail and service areas, as well as playgrounds, clubrooms and even an open swimming area. In contrast to the high–rise apartment structures, the public structures are usually designed in the form of low–lying pavilions. The focal point of the entire estate is provided by the Ládví Centre, situated near the southwest edge, containing among other facilities a shopping centre with a wide range of sales and service spaces, the cultural centre, and a cinema. No less important in forming Ďáblice is its extensively planned composition of public vegetation, conceived by the major landscape architect Zorka Buriánková, including various plantings of diverse tree–species and a biologically active lake.

Additionally, the Ďáblice estate stands out for its unusual quantity of public artworks, usually situated in interior spaces and created by many of the era’s leading artists. Few other Czech housing estates of the era can match them in number. For instance, the entrance halls of most of the slab–blocks have their own artworks, while other such works can be found inside many public buildings — schools and kindergartens, the cinema, the cultural centre, or even in the commercial buildings. Only a few artworks, though, are installed in the outside spaces; of these, perhaps the best–known is the sculptural group Pelicans by Jiří Černoch in the centre of the lake. One equally significant component of the estate is the memorial space of the Kobylisy rifle-range, now a monument to the Czech anti–Nazi resistance, created in the estate’s northwest corner on the site of the Nazi executions only shortly after the end of WWII. This memorial complex was created at the same time as the estate, designed by architect Josef Polák and itself the site of several large–scale sculptural and mosaic works.

Completing the book are several personal recollections by residents of the housing estate, brief biographical outlines of selected architects, an overview of the typologies for both residential and public buildings and a list of those executed at the Kobylisy firing range. 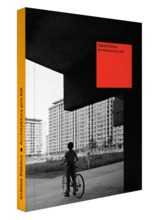 The Ďáblice Housing Estate: Architecture for the People
Buy now