Save
Concrete Siberia: Soviet Landscapes of the Far North
Share
Or
Copy

A photographic insight into the Soviet-era architecture of one of the most extreme, little-known and vast territories on Earth.
From the Ural Mountains to the Arctic Circle, the book features the extensive micro rayon of Siberia’s urban centers, the brutal landscapes of industrial monotowns, cosmic circuses, concrete theatres and opera houses, as well as prefabricated panel blocks, or panelki, erected on permafrost.

Divided into 6 chapters, Concrete Siberia by Zupagrafika contains over 100 photographs taken by Russian photographer Alexander Veryovkin, capturing the stark splendor of post-war modernist architecture scattered around the cities of Novosibirsk, Omsk, Krasnoyarsk, Norilsk, Irkutsk and Yakutsk and the quotidian lives of their inhabitants.

The publication includes a foreword by architectural critic Konstantin Budarin, orientative maps and informative texts on the featured cities and buildings.

Prefabrication and serialization became the key premises for Soviet urban development when Khrushchev came to power. For Siberia, it meant a new wave of colonization.

– Excerpt from the foreword 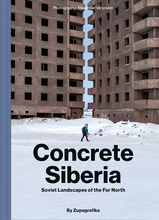