Save
Building Great Schools for a Great City
Share
Or
Copy

Description via Amazon. The New York City School Construction Authority’s (SCA) mission is to design and construct safe, attractive, and environmentally sound public schools for children throughout the communities of the City’s five boroughs.Since its creation in 1988, the SCA has kept moving forward, constantly innovating to ensure that it designs and builds schools that meet the current needs of the City’s students and teachers. In addition to building and modernizing educational facilities, the SCA is invested in developing much-needed resources and capacity building mechanisms for engaging diverse communities in the construction process. The SCA maintains one of the most successful small business development programs in the country and recently established a workforce development and small business initiative for college students.As the SCA celebrates its 30-year anniversary, its primary goal remains the same as on the day of its creation: to ensure that all children in the country’s largest public school system have the facilities necessary to prepare them for the twenty-first century and beyond. 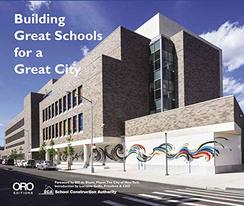 Building Great Schools for a Great City
Buy from
amazon.com
Share
Or
Copy