Save
Notes from the Underworld: An Architectural Exploration
Share
Or
Copy

Since early times, humans have explored the space below their feet for different purposes: to flee persecution and war, to find protection from severe climates, to improve urban life—and more recently, to solve environmental problems. A rare look at old and new subterranean structures from an architect's perspective, this seminal book examines the underworld through the lenses of wartime, life and death, religious and secular rituals, and adaptive reuse. The atlas of 80+ international projects ranges widely in time period and type, from a house in a defunct nuclear silo to an Arctic seed bank, a Beirut nightclub, art venues, an Italian winery, and a monastery carved into a mountain. All are surprising examples of how invisible man-made spaces follow the same cultural and economic cues as their visible counterparts and are places where we store, hide, repress, and live.

Chapter 1 - Upside Down: The Making of the City
The Quest for Water
Surveillance and Control
Transit Systems
Data Center: The Rise of a New Typology 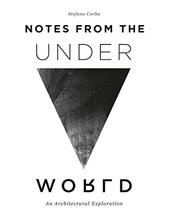 Notes from the Underworld: An Architectural Exploration
Buy now
Buy from
amazon.com