Save
An Enterprising Path to Barrio Chino: A Story of Barcelona
Share
Or
Copy

Description via Amazon. In 1925 a journalist from the Barcelona newspaper El Escándalo used the term Barrio Chino in a somewhat derogatory way to describe part of the older city. While the area in question represented a dystopian underbelly of the city, known for its impoverished living and working conditions together with its ‘red-light’ subcultures, it never existed as a ‘Chinatown’ in either a physical or social sense. However the name of this mythical community stuck from the 1920s onwards, appearing on maps and descriptions of the inner city but devoid of any hint of Chinese inhabitants or their culture.The book takes this as a starting point to chart the development of Barcelona over two hundred years using a series of ‘diaries’ and drawn images. These are set around four generations of a fictional Chinese dynasty and their imagined architectural participation in some of the major events in Barcelona’s modern history. As residents of the Barrio from the mid-nineteenth century, they individually document diverse contributions to the city during periods of dynamic growth. This is set against a backdrop of cataclysmic political change and exemplary forms of urban regeneration which have provided Barcelona with its contemporary ‘World City’ status as it plans for the future. 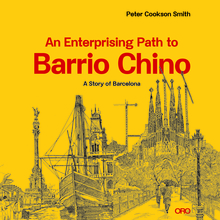 An Enterprising Path to Barrio Chino: A Story of Barcelona
Buy from
amazon.com