Description via Amazon. Monotown: Urban Dreams Brutal Imperatives examines the post-industrial transformation and transnational legacy of planned single-industry towns that emerged as a distinctive sociopolitical project of urbanization in the Soviet Union during the 1920s. Monotowns took form through the teleological establishment of industrial enterprises strewn across remote parts of the Siberian hinterland and entailed the relocation of vast populations requiring services, housing, and social and physical infrastructure, all linked to a given town's productive apparatus. Today, having outlasted the political and economic systems that made them viable, many have become shrinking towns with graying populations and obsolete enterprises, even as they are subjected to considerable national investment and commanded to grow in order to catalyze their respective regions. Given this implied imperative for transformation, the work goes on to explore the largely overlooked legacy of the Monotown as a model of urbanization that was deployed upon remote geographies of China and India through Soviet-aided industrial development projects. By exploring the etymology of the Monotown over time in this expanded field, the work establishes a broader yet more specific dialogue about this model's complex legacy and future. 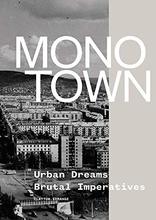