Save
Cook's Camden: The Making of Modern Housing
Share
Or
Copy

The housing projects built in Camden in the 1960s and 1970s when Sydney Cook was borough architect are widely regarded as the most important urban housing built in the UK in the past 100 years. Cook recruited some of the brightest talent available in London at the time and the schemes – which included Alexandra Road, Branch Hill, Fleet Road, Highgate New Town and Maiden Lane – set out a model of housing that continues to command interest and admiration from architects to this day.

The book is the first to provide a comprehensive study of the work of recent RIBA Royal Gold Medal winner Neave Brown, as well as schemes by Benson & Forsyth, Peter Tábori, Colquhoun & Miller, Edward Cullinan and Farrell Grimshaw.

The Camden projects represented a new type of urban housing based on a return to streets with front doors. In place of tower blocks, the Camden architects showed how the required densities could be achieved without building high, creating a new kind of urbanism that integrated with, rather than broke from, its cultural and physical context.

This book examines how Cook and his team created this new kind of housing, what it comprised, and what lessons it offers for today. New colour photographs combine with original black and white photography to give a fascinating 'then and now' portrayal not just of the buildings but also of the homes within and the people who live there. 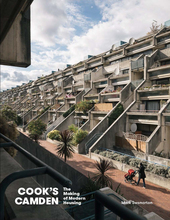