The fire on 15th April that devastated Notre Dame, like the ones that all but destroyed Mackintosh’s Glasgow School of Art, reminds us that the conservation of buildings can be a monumental task.  Donald Insall’s book Living Buildings concludes by outlining problems met and solved in restoring Windsor Castle, itself devastated by fire in 1992. Of course, these examples arose in dramatic circumstances. More often than not conservation – be that the repair or restoration of a building - is prompted by age and the elements. Buildings do decay but, as Insall explains, they also change structurally, physically and socially.

Living Buildings was first published in 2008 after more than 50 years of practice and sets out ‘how we came to think the way we do.’ As the title Living Buildingssuggests, Insall’s thesis is that the way buildings change makes them virtually live, which he explains in an early chapter called ‘Buildings Are Alive.’  Whilst buildings are the product of human conception and continuing use, their materials decay and are successively replaced. ‘A door is wood, is a tree.’ This places Insall in the Viollet-le-Duc camp and somewhat at odds with Ruskin, whose philosophy was to preserve matter itself.

Insall trained in the 1940s in a time of austerity when our cities had been damaged or neglected by war. Much had been destroyed, and what had survived was in poor repair. Add to this a SPAB Lethaby Scholarship, which gave him hands-on experience on building sites, and his studies in town planning which he credits for an awareness of change - he defines history as the ‘acceptance of continuing change’.  All of these drew him to a love of surviving buildings and their history, and his belief that there was an opportunity to ‘reset’ the way we thought about buildings.

More than 70 years later the world is a very different place. The Welfare State, social democracy and state-funded reconstruction has given way to neo-liberalism and consumerism. This book, and the practice of conservation, offers us another perspective on the world and the environment.  It offers an ideology.  Insall credits his teacher E.A.A. Rowse, and in turn the Scottish writer and mentor Patrick Geddes, for their foresight about the environment. Bear in mind Geddes was writing about this in the 1920s. They talked of buildings and communities, and of the individuality of people, places and buildings. As a result, Insall writes not about shape and surface, but about a building’s identity and character, and about all things changing and civic. He seeks to empathise. His motto is to ‘Bring forth the best’. Indeed this desire to identify with the individual building, the place and its history is fascinating. There are parallels with a great actor whose skill is to empathise with their character in hugely complex and nuanced ways, but who may also feel more comfortable in character. One senses, that most if not all Donald Insall Associates’ works are ‘in character’.

The structure of the book reveals an extraordinary perspective on the conservation of buildings and demonstrates it to be a far more complex and varied field than most architects presume.  Almost half is dedicated to ‘Ten Degrees of Intervention’ – ten chapters with titles ranging from ‘Programmed maintenance,’ to ‘Radical improvement’ and ‘Reincorporating existing buildings’ – which together describe a huge range of activities and techniques from the mundane to the most demanding.  I felt like I was listening to a musician who plays every instrument in the orchestra, or observing a surgeon who operates on every part of the body. Conservation puts the design of new buildings in the shade.

Each of the ‘Ten Degrees of Intervention’ are illustrated by example. ‘Radical improvement’ by the work on Chevening House, a C17th house attributed to Inigo Jones. As the title of this chapter suggests, Donald Insall Associates’ intervention – a vital re-conception of the building’s external form and detailing - was radical. In his words their work was not to ‘put back’. Instead the building ’moved onwards’. ‘Restoration & rebuilding’ describes their work on a series of houses in the UK - Asgill House, Kent House, Berrington Hall and Eardisley Park - each of which had been destroyed by ill-advised and grotesque additions or disaster. This statement distils much of Insall’s philosophy, ‘Some buildings do cry out for restoration; our only caution would be to recall that the result is still of more than one date, the reinstated element being essentially of today, even if in the manner of yesterday.’ New matter, but also newly imagined form, reflect a curiosity about identity, rather than a literal understanding of character. And when repairing the ceiling of the House of Lords, Insall explains the process of disassembly and the role of survey drawing enabling the architect-archaeologist to decide how best to rebuild. The same forensic analysis and illustration is given to each of the ten interventions.

The book itself is a handsome hardback packed full of drawings and photos. Living Buildings is both a manual and monograph, its philosophy and principles defined by the opportunities that more than half a century of work has afforded. Insall’s education prompted an interest, a timely awareness; but as this tome explains, it is through practical experience that an architect can best demonstrate their ideas. They are not hypothetical. They are inherently practical, and empirical. And so it is that this book is really about practice, and about sharing the many lessons of experience. 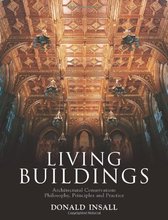