Save
In Progress: Chapel of Eternal Light / Bernardo Rodrigues Arquitecto
Share
Or
Copy

Situated at the based of a steep field, the Chapel of Eternal Light offers views to the water beyond, an ideal location. With its slanted walls, the inverted pyramid shape is anchored by a concrete slab and formed from a metal structure. Follow the break for more construction photographs, drawings, and model pics of this in progress project. 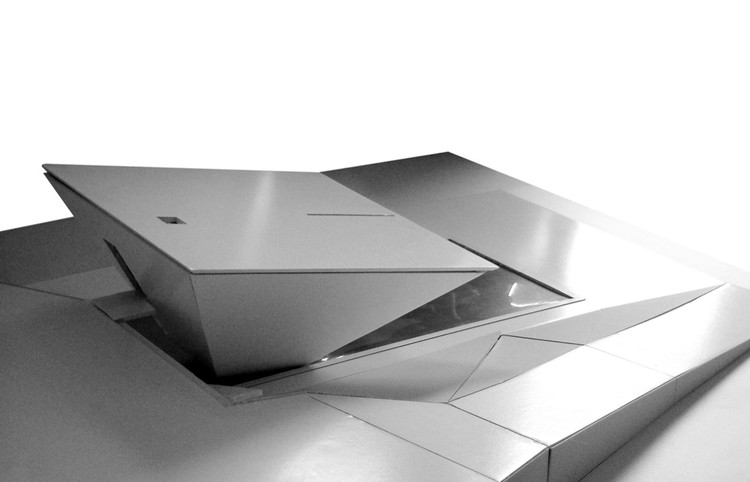 The architects provided the following description about the Chapel of Eternal Light:

The structure is twofold, concrete and metal. It is anchored in a first inverted pyramid of concrete and containing the two slabs and sets the ground floor of the sacristy. In those four faces of concrete shall be anchored metal parts that comprise the support walls of the chapel on the top floor, covered and insulated with screens and panels VIROC inside and black granite slabs on the outside and that support the steel structure also coverage. It is visible in the concrete base of the pyramid outside the metal parts and support coverage in the range of glass above the chapel, evidence of tectonic structural solution.

It has an entrance space, with access via a small bridge. At the entrance is located a bathroom. The exterior stone cladding, granite Angola, supported by parts Halfen also covers this area already inside, and the doors of two compartments lined described with the same stone, screwed.

The Chapel, in response, has its slanted walls following the general exterior shape of an inverted pyramid, being here a space that grows in height.  The floor is wood and the walls plastered and painted with silver. A long longitudinal opening on the south side of the cover allows the illumination by a spotlight that continued throughout the day traveling the chapel. Under this opening is planned site for the casket and the altar.

All around the floor at the junction with the walls is provided with a full glass lighting in this so as to diffusely illuminate the walls silvery slopes. At the meeting of those with coverage is also provided a slit all around the room of the chapel in blue glass, letting a slight presence of light outside during the day and containing electric lighting for the same effect at night. There’s a small cruciform opening on the south wall, the height of a seat on the axis of the room, so as to leave the ring looking for a slight angle of vision on the outside. By the same cross-shaped opening and internally coated brass, enter a halo of light that you want to put a character closer to the religious symbolism and liturgical associated with Christian religion.

An opening in the same wall of the main entrance, lies the access to ground floor. It consists of a staircase lined with marble and at an angle relative to the plant to follow the shape and structure descending into the chapel area.  This floor has an area of the sacristy, with closet and a pantry and Sanitary Installation lined with tile. It is located here also an exterior door access to the chapel about connecting the middle of a staircase ramp access between the square and the upper area of the reflecting pool behind an slightly inclined shape of the chapel. This ramp, as well as two small bridges to access the entries contain two guards in steel and in the case of the bridge’s upper deck, the guard in addition to the steel contains glass to protect and preserve access.