Apartamento is pleased to announce the release of the second title in a series of books devoted to some of our favourite architects, the houses they build, and the stories behind them. In La Fábrica, readers are transported to the fringe of Barcelona and deep into the labyrinthine home of world-renowned Catalan architect Ricardo Bofill, who transformed a disused cement factory into his personal and professional headquarters at the beginning of the 1970s.

Bofill’s architectural practice gathered not only architects and engineers, but also sociologists, mathematicians, and poets; in the process, La Fábrica became a meeting point for a broad cultural movement that shaped Barcelona—and Spain—towards the end of the Franco dictatorship, as well as neighbouring countries like France, where he was responsible for designing a series of monumental, utopian urban developments.

This new book captures the source of all this activity: Bofill’s own home. It features a short story by Jordi Labanda, as well as original photography by Nacho Alegre and archival images courtesy of the Ricardo Bofill Taller de Arquitectura. 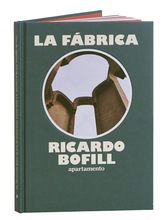