Two years on, the first tent has been installed at the Ritsona refugee camp in Greece, currently hosting more than 800 refugees. The camp which now hosts the inaugural Maidan Tent was also the subject site where the design team made eight visits to throughout the past two years.

During the visits, the team reflected on their conversations with refugees. They recognized a psychological ‘migration trauma’ within the community, the result of dangerous journeys in improvised or unsafe rafts across the Mediterranean Sea.

Maidan Tent covers an area of 200 square meters, with an aluminum structure covered by a water, wind, and fire resistant textile offering a sheltered, safe environment for up to 100 people. The shelter is inherently flexible, with standardized components allowing for easy installation and maintenance, and eight modular spaces which can be adapted for a range of uses.

The scheme’s circular shape is a conscious attempt to invite people to enter from any direction, where a series of semi-private spaces can enable refugees to establish personal relationships.

Learn more about Maidan Tent from the official website here. 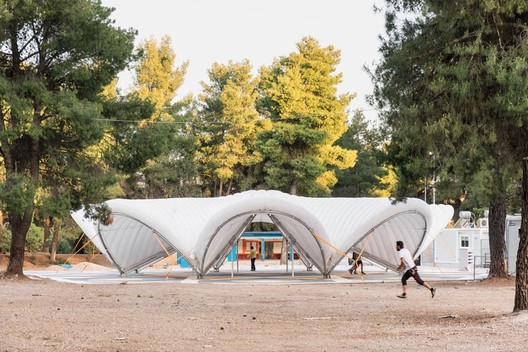