Save
New Carbon Architecture: Building to Cool the Planet
Share
Or
Copy

Description via Amazon. “Green buildings” that slash energy use and carbon emissions are all the rage, but they aren’t enough. The hidden culprit is embodied carbon―the carbon emitted when materials are mined, manufactured, and transported―comprising some ten percent of global emissions. With the built environment doubling by 2030, buildings are a carbon juggernaut threatening to overwhelm the climate.

It doesn’t have to be this way.

Like never before in history, buildings can become part of the climate solution. With biomimicry and innovation, we can pull huge amounts of carbon out of the atmosphere and lock it up as walls, roofs, foundations, and insulation. We can literally make buildings out of the sky with a massive positive impact.

The New Carbon Architecture is a paradigm-shifting tour of the innovations in architecture and construction that are making this happen. Office towers built from advanced wood products; affordable, low-carbon concrete alternatives; plastic cleaned from the oceans and turned into building blocks. We can even grow insulation from mycelium.

A tour de force by the leaders in the field, The New Carbon Architecture will fire the imagination of architects, engineers, builders, policy makers, and everyone else captivated by the possibility of architecture to heal the climate and produce safer, healthier, and more beautiful buildings.

Bruce King, a structural engineer for thirty-five years, is Founder and Director of the Ecological Building Network (EBNet) and author of Buildings of Earth and Straw, Making Better Concrete, and Design of Straw Bale Buildings. He lives in San Rafael, California. 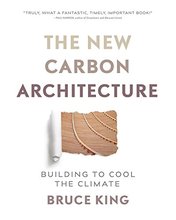