✕
Save
The Heart of the City. Legacy and Complexity of a Modern Design Idea.
Share
Or
Copy

The book focuses on both the historical and theoretical reinterpretation of the Heart of the City Idea, which was introduced at CIAM 8 in 1951 and has played an impor¬tant role in architectural and urban debates ever since. It is a comparative history-theory, which traces the social-spatial role and character of transdisciplinary encounters and migrations on the concept of the Heart of the City.
The main aim is to illustrate the continuity and the complexity of this pivotal theme, highlighting a new perspective on the significance of public space in our contemporary urban condition as well.
In an age of rapid urbanisation and fast transformations of the public realm, the book is also of interest to compare to our current attempts at planning and thinking about the city. Indeed, the Heart of the City has many links and resonances with our contemporary debate about the centrality and the identity and with the right public space design. It is a theoretical discourse which has been often exposed as a specific post-war debate; on the contrary, its complex interpretations have many layers of sig¬nificance which have many reflections on the contemporary social, physical structure of the city.
Furthermore, within the dissolution of the contemporary urban elements, or their legibility, we need to go back and study the essentials that lie at the foundations of the urban structure. The Heart of the City is certainly one of them. It is a Constitu¬ent Element at the basement of the urban structure dealing with the balance between the private and the public spheres, between the social and physical structure of the city. The issue of the Heart of the City is the question of the symbolical and physical reform of the structure of the city through the creation of centres of social life.
After the first chapter that reveals the debate which occurred at CIAM 8, three actors are used in order to dissect the complexity of the Heart of the City theme, similarly to the sections of a complex project or territory. These sections reveal three different relationships: the First Urban Design Conference at Harvard in 1956 and Victor Gruen, and the Heart as Urban Design and Invention of the City; the CIAM Summer School in Venice in the 1950s and the Heart of the City as Continuity; Jaap Bakema and the Heart of the City as Total Relationship. The failures, successes and contradictions of the theories and projects of the three actors are important key stud¬ies for contemporary design of the City.

Foreword by Tom Avermaete and Paola Viganò:
Bodily Metaphors and Urban Metamorphosis: The Vicissitudes and Potentials of an Organic Figure.

PART I PREAMBLE. THE HEART AND THE CIAM’S DISCOURSE

Introduction: The Heart and the City.

1 CIAM 8: The Heart of the City, towards a new humanism.

PART II ANATOMY OF THE HEART OF THE CITY

2 First UD Conference and Victor Gruen: The Heart of the City as Urban Design and Invention of the City.

3 CIAM Summer School in Venice: The Heart of the City as Continuity.

4 Jaap Bakema: The Heart of the City as Relationship.

5 Arteries of productive Ambiguities and Simultaneities. 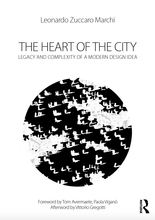 The Heart of the City. Legacy and Complexity of a Modern Design Idea.
Buy now