Description via Amazon. A passionate and personal book about the writer's own love for a controversial architectural style. Featuring buildings typically constructed of concrete, Brutalist architecture flourished in the 1950s to mid-1970s. Though controversial, the style has an enthusiastic fan base—including John Grindrod, who is on a mission to explain his passion. His enlightening study brings humor, insight, and honesty to the subject as it journeys from the UK to examine Brutalism’s influence around the world, from Le Corbusier's designs in India to Lina Bo Bardi's buildings in Brazil. Featuring a series of mini essays, along with illustrations by The Brutal Artist, it explains the human aspect of Brutalism and explores its architectural, historical, and even pop-cultural meanings. 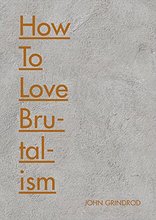 How to Love Brutalism
Buy from
amazon.com
Share
Or
Copy