Description via Amazon. ‘Merrick House’ is an exhaustive documentation of one of Western Architectural period jewels, a home Merrick as a young architect built by hand on the steep wooded slopes of West Vancouver, BC in the early seventies. The photographs, by Michael Perlmutter, bring out the wonders of architectural space and materiality, and Robins’ text explores in great detail the influences that Merrick drew from, the way it was constructed, the many spatial moves he employed, and how it changed over time with successive renovations. The 17 level edifice is both contextual and truly eccentric, with spatial majesty.

Its Japanese wood detailing brings a period charm. The essence and stunning beauty of the house is found in the multitude of flying structural wooden columns and beams, angling out like trees to hold up the oversized wooden roof, all seemingly out there alone amidst the massive cedars and West Coast greenery. Their substantial size and rootedness provide that distinct calmness experienced within a still forest. A remarkable thing about the visible structure of the house is that it is almost entirely composed of simple and inexpensive dimensional lumber.

Merrick chose common 2x4s, 2x10s, and so on as his palette. Whilst at once showing he was comfortable with regular planks from the lumberyard, in many places Merrick meticulously carved the ends into fanciful shapes. It is a move that reveals again the shadow of his mentors, Ron Thom and, before him, Frank Lloyd Wright. Robins delves into the quirks and risks Merrick embarked upon, the madness of huge panes of glass, for instance, in delicate harmony with nature. Sometimes, such as in his retention of large rocks flowing into the interior space, he defied building codes and common sense, but it all works. It is a house full of wonder. 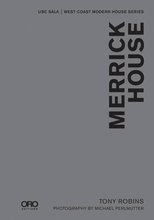