Save
A State Beyond the State
Share
Or
Copy

Supported by numerous interviews and primary data, this book points out the threats posed by typical large-scale projects of single SOEs (state owned enterprises), and further shows alternative development potentials that match the long-term socioeconomic demand, by learning from self-evolving SOE areas shaped by the combined forces of various public and private stakeholders.

Since China’s 1980s economic reform, the ubiquitous semi-marketized SOEs have established themselves as immovable landholders in the urban landscape. To improve our understanding of the Chinese SOE urbanism, Ting Chen made a first-hand account and evaluation of various SOEs’ urban performances and the differing socioeconomic influences of SOE land transformations. The urban core of the Special Economic Zone Shenzhen, largely constructed by SOEs, was chosen as the case study. 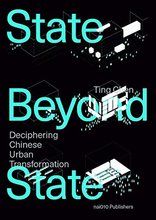 A State Beyond the State
Buy now
Buy from
amazon.com
Share
Or
Copy