Frei Otto (1925-2015) was best known for his innovative lightweight structures, even naming an institute after them at the Stuttgart Technical University. His speciality in tension and membrane structures were, and still are, not only beautiful, but also incredibly modern for his time, creating forms that were entirely new to the eye. One of his most notable creations is the Multihalle, which he contributed towards with the architects Carlfried Mutschler + Partner in 1975; it still remains the largest freestanding wooden lattice structure in the world.

Following the award of the Pritzker Prize to Otto shortly before his death in 2015, the ZKM Center for Art and Media in Karlsruhe is hosting an exhibition of his works in order to introduce "new perspectives on the work of Frei Otto" while "formulating present-day questions concerning the future of our built environment." In service of this aim, architects FAR frohn&rojas created an exhibition design both reminiscent of Otto's deceptively simple structures, and carefully calibrated to show the huge archive of work to great effect. Read on to find out more about the exhibition and its design. 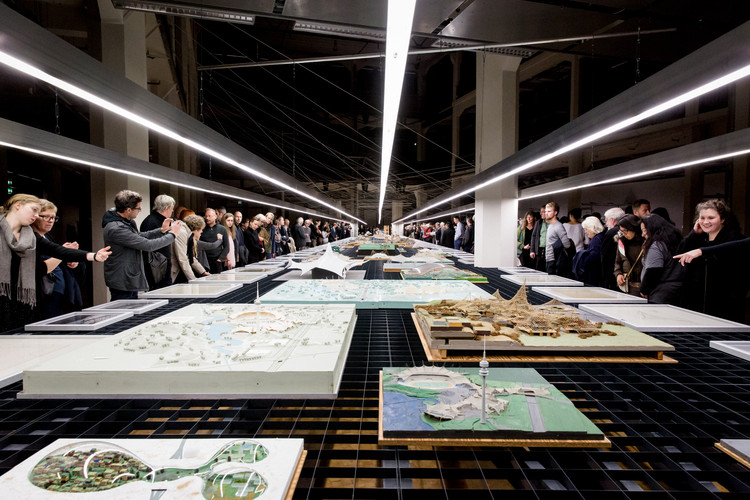 Frei Otto (1925-2015) is one of the best known and most innovative international German architects of the 20th century and is a key figure in the architectural culture of the federal state of Baden-Württemberg. In 2015 he was awarded the Nobel Prize for Architecture for his work, also known as the Pritzker Prize, and is the highest honor for architecture in the world. The biggest exhibition on the oeuvre of Frei Otto is a shared project between the Archive of South West Germany for Architecture and Engineering (saai) of the KIT and the Wüstenrot Foundation in cooperation with ZKM | Karlsruhe. Projects that are both known and completely unknown are presented. The material encompasses over 200 models, approximately 1,000 photos, drawings, sketches, plans and films as well as a large-scale media projection. In the 1950s Frei Otto was a major presence at garden shows with his marquee designs, offering the emerging West Germany a diversion from its post-war reconstruction. In 1964 he founded the Institute for Lightweight Structures at Stuttgart Technical University, which he made into one of the leading research institutes for environmentally aware architecture and engineering sciences in the world.

With the German Pavilion at the Expo 1967 in Montreal, which he realized with architect Rolf Gutbrod, he created a symbol for the newly open Germany. This impression was further strengthened by the roof-scape for the 1972 Olympic Games in Munich, which he created together with the architects Behnisch & Partners. Over the following decades Otto participated in the completion of numerous buildings such as the Multihalle in Mannheim, which was designed by the architects Carlfried Mutschler + Partner in 1975. The Multihalle remains the biggest free-standing wooden lattice construction in the world, and was awarded heritage status due to its sophisticated, materials-minimizing construction in 1998. Several surveys plan to subject the “wonder of Mannheim” to a general refurbishment. The partial upkeep of the hall and its dismantling are presently being discussed. In 1997, together with Frei Otto, the architects Ingenhoven, Overdiek, Kahlen and Partners won the competition for the refurbishment of Stuttgart Central Railway Station. Otto designed the chalice-shaped pillars which characterize the overall appearance of the station. Otto developed the optimum design of the pillars using numerous models. Otto distanced himself from the project in 2009. In the year 2000, Otto designed the Japanese Expo Pavilion in Hanover with the architect Shigeru Ban. The exhibition consists of four central positions which fill each atrium to spectacular effect and guide the visitors through the wide ranging archive material which the Archive of South West Germany for Architecture and Engineering (saai) has prepared especially for this exhibition.

Frei Otto’s approach expresses itself in its willingness to experiment, in which methods that straddle architecture, science and art can be found. He developed instruments for researching self-organizing processes, measurement tables for determining force flows, equipment for researching pneumatic design forms and tools for the analysis of sophisticated network models. His tireless experimentation with models served the purpose of researching causal contexts and was simultaneously part of the formgenerating design process. In this way Frei Otto provided the foundation for a culture of experimentation between academic observation and artistic skill which remains relevant to this day — a form of technical-intellectual self-alignment in which design can represent the development of individual knowledge as well as a starting point for a collective discourse on the future of the built environment.

With Frei Otto, the architectural models do not function as “static objects” but as “dynamic objects”, or as process models for the entire environment. They embody an “operational aesthetic” (Georg Vrachliotis) which alternates between the precision of scientific objects and the imagination of artistic instruments.

The innovative potential in Frei Otto’s oeuvre is based on the dramatic interdisciplinary nature of his thinking that straddles architecture, technology, science and society. He consistently addressed the example provided by nature, and throughout his life, tried to make use of it for architecture and engineering. The goal of this exhibition is to convey new perspectives on the work of Frei Otto and to serve as a basis for new discussions on the future of the built environment between architecture, technology, sustainability and society.

The exhibition consists of four central positions which fill each atrium to spectacular effect and guide the visitors through the wide ranging archive material which the Archive of South West Germany for Architecture and Engineering (saai) has prepared especially for this exhibition.

All of the models are organized to scale, placed in their content-related and historic context, and presented on an approx. 50-meter-long table construction. The technical and design context of the individual models and projects is supplemented by the original plans and detailed picture material. In this way, the researching character and aesthetic continuity in Frei Otto’s thinking becomes evident. The visitors gain the impression that they are exploring a “horizontal cabinet of curiosities”.

A key component of the exhibition is the “open archive.” This consists of 18 over-sized archive shelves which are constructed in a circular form around both courtyards and therefore provide the exhibition with spectacular cohesion. With the use of selected original plans, photos, books and reproductions, the users are guided through the key events in the life of Frei Otto — the Development Institute for Lightweight Building in Berlin, the world-famous Institute for Lightweight Structures in Stuttgart and his studio in Warmbronn, to ground breaking projects like the German Pavilion for the Expo 67, the Multihalle in Mannheim and his initial research into Stuttgart 21. The shelves of the archive function as a freely accessible storage area and a place of knowledge that straddles presentation and storage.

Throughout his life, Frei Otto collected and archived photographs of structures from the natural world. They served as a source of inspiration and free association to him and were also definitive source of research. The key factor in this respect is that Frei Otto consistently addressed the example provided by nature and tried to make use of it for architecture and engineering. At 18 tables — which are inspired by the tables in Frei Otto’s studio in Warmbronn — visitors are able to see large-format photos of studies of nature, spiders’ webs, sand structures and soap bubbles. A sophisticated world of images is opened to them which provides insights into the poetic and scientific cosmos of Frei Otto’s thoughts and imagination.

Frei Otto’s innovative potential is based on the dramatic inter-disciplinary nature of his thinking that straddles architecture, technology, science and society. The image and technical media dimension play a major role in this respect. In a projection which is over 25 meters in size, this thinking is conveyed in terms of its aesthetics and power of media-based visual expression. 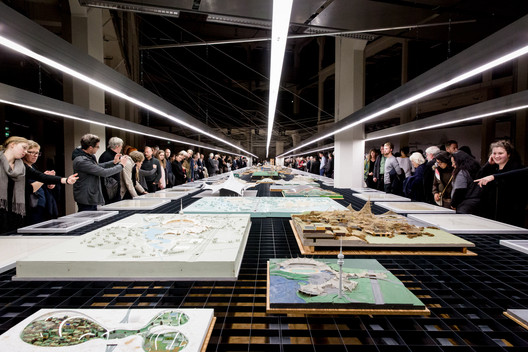