Steven Holl Architects have received the go-ahead for a new pedestrian bridge linking their own Kennedy Center Expansion to the Potomac riverfront. Originally proposed by Kennedy Center architect Edward Durell Stone in 1959, the idea to extend the lively arts program from the center along the waterfront is set to increase the vitality of both existing programs. The bridge approval was one of the last remaining piece of the project, with the majority of the Kennedy Center Expansion already under construction.

The Kennedy Center, a national center for performing arts, was established in memoriam of President John F. Kennedy in 1959. The prestigious original building was marked for expansion, and a competition in 2013 saw Steven Holl Architects selected to undertake the design. The expansion encompasses the area south of the center to the waterfront, integrating the landscape and river into the center's existing program. The bridge is an integral part of this plan, giving direct pedestrian access across this new zone.

In the landscape adjacent to the main expansion building towards the riverfront, various gardens and landscaped areas will play host to outdoor performances and on-site installations. A new cafe will further encourage the movement of activity from the waterfront upwards to the Kennedy Center.

The bridge itself will also connect the center to Georgetown to the north and the Lincoln Memorial to the south to create new public access. With its approval, construction will take place within the next two years, completing Steven Holl Architects' engagement with the center.

For more information on Steven Holl's active projects, check out our recent round-up. 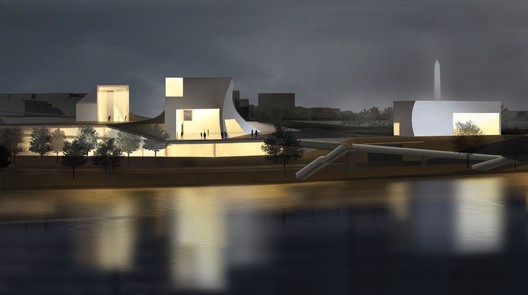