Save
Serralves Museum of Contemporary Art Presents “Raw Material: A View of the Archive of Álvaro Siza”
Share
Or
Copy

Description from The Serralves Museum of Contemporary Art: The first of a developing programme at the Serralves Museum of Contemporary Art of exhibitions talks and events dedicated to contemporary architecture, ‘Raw Material’ presents plans, sketches, correspondence and photographs that offer a fuller understanding of the process of architectural design, beyond the self-sufficiency of the realized project. This will be the first exhibition to draw upon the recent gift to the Fundação de Serralves of 40 projects from the archive of Álvaro Siza as part of a collaboration between Fundação de Serralves, the Canadian Centre for Architecture in Montreal and Fundação Calouste Gulbenkian in Lisbon.

Álvaro Siza’s practice is distinguished by his use of drawing as a working instrument in the prefiguration of forms and spaces within the process that brings him successively closer to the desired result. But an archive is more than just a set of drawings. The architect’s correspondence with his clients, the photographic record of the places where the works are to be built, relations with regulatory authorities and the opinions of the multiple actors involved in the construction processes, the models that support the perception of the proposals, the minutes of meetings and reports of the tensions arising at the building sites are documents that record an infinite number of episodes that remain invisible in the finished work. Offering insight into their contingent processes, the exhibition also offers invaluable understanding of the processes associated with the inventory, classification, and conservation of Siza’s archive, which will serve as a focus for future research and discussion about the role of architecture in contemporary society.

Raw Material: A View of the Archive of Álvaro Siza is organized by the Serralves Museum of Contemporary Art, Porto and is curated by architect André Tavares. 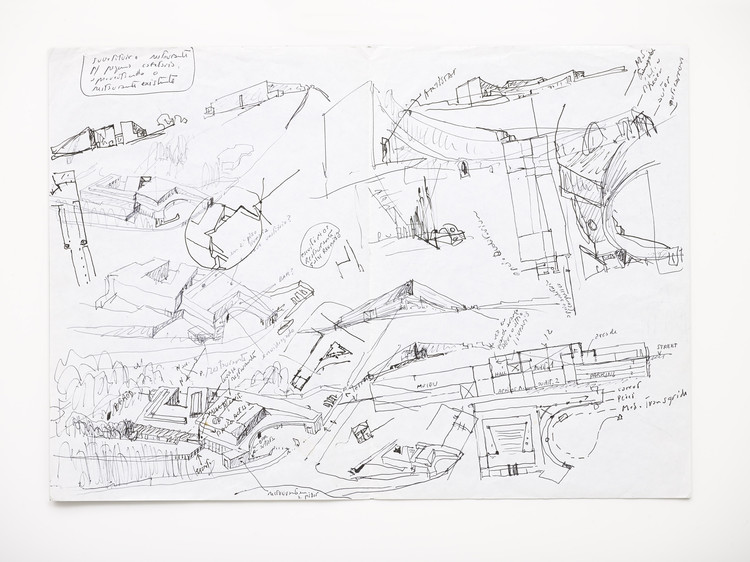 About the curator André Tavares
Since 2006, architect André Tavares has been the editor of Dafne Editora, using publishing as a form of cultural and architectural practice. He was editor-in-chief of the magazine Jornal dos Arquitectos (2013-15) and is currently curator, together with Diogo Seixas Lopes, of the 4th Lisbon Architecture Triennale, ‘The Form of Form’. He holds a doctorate from the Faculty of Architecture of the University of Porto, where in 2009 he completed his dissertation on the presence of reinforced concrete in architects’ design strategies in the early 20th century. Resulting from his research in Mendrisio, Paris and São Paulo, he has published several books addressing the international circulation of knowledge among Portuguese-speaking architects, including ‘Arquitectura Antituberculose’ (FAUP-publicações, 2005), ‘Os Fantasmas de Serralves’ (Dafne, 2007), ‘Novela Bufa do Ufanismo em Concreto’ (Dafne, 2009) and ‘Duas Obras de Januário Godinho’ (Dafne, 2012). His lastest book, ‘The Anatomy of the Architectural Books’ (Lars Müller/Canadian Centre for Architecture, 2016), addresses the crossovers between book culture and building culture. In 2015 he curated the exhibition ‘Serralves Villa: ‘The Client as Architect’ at the Serralves Museum of Contemporary Art.