New images and information has been released regarding Santiago Calatrava's competition-winning design for Dubai's new "landmark" observation tower. Planned for a site in Dubai Creek Harbor, near the Ras Al Khor National Wildlife Sanctuary, the tower was inspired by the "natural forms of the lily and evokes the shape of a minaret, a distinctive architectural feature in Islamic culture."

"The building’s design is inspired by the Islamic tradition, evoking the same history that brought the world the Alhambra and the Mosque of Cordoba. These architectural marvels combine elegance and beauty with math and geometry," commented Calatrava. "The design of the tower of Dubai Creek Harbor is rooted in classical art and the culture of Dubai itself."

"It is also a major technological achievement. Throughout my career I have used technology and engineering as a vehicle for beauty and art. This project is an artistic achievement, inspired by the goal of making this space a meeting point for citizens, not only from Dubai and the UAE but all across the world. It is a symbol of belief in progress," he added.

The "elongated, oval-shaped bud" that takes shape at the top of the tower will be outfitted with 10 observation decks, including a 360-degree Pinnacle Room and two VIP garden decks. Its "slender stem, reminiscent of the delicate ribbing of the lily's leaves," will serve as the structure's spine while anchoring the building to its ground level Central Plaza that offers world-class retail, a museum, educational facilities and an indoor auditorium.

The facade will be kept clean with the water collected by the building's highly-efficient cooling system. Integrated shading and solar protective landscaping will also be used to promote efficiency. 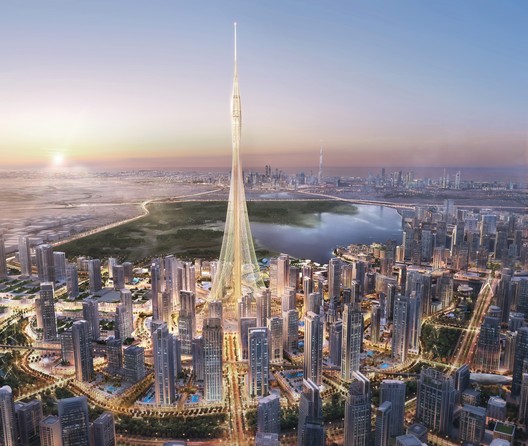