Save
The Art of Architecture: LEGO Sculptures by Adam Reed Tucker, with Photographs by J. Hunt Harris II
Share
Or
Copy

Architect Adam Reed Tucker’s LEGO® models of architectural landmarks are currently on display at the Figge Art Museum in Davenport, Iowa. Featuring everything from the Empire State Building to the Burj Khalifa, the models are built using only the “simplest bricks and hinges.”

Description from the Figge Art Museum:

Modern architecture takes the stage in the Katz Gallery with the opening of The Art of Architecture. Adam Reed Tucker, an architect by training, has been making large scale models of LEGO® bricks since 2001. One of only 11 LEGO® Certified Professionals in the world, Tucker creates architectural models that become the basis for new LEGO kits and other products.

The Figge exhibition will include twelve renditions of architectural masterworks, including the John Hancock Building, the Empire State Building, and the St. Louis Arch. It also includes two unbuilt designs, the Chicago Spire and 7 South Dearborn buildings, as well as the world’s current tallest building, the 162-story Burj Khalifa in Dubai. Comprised of over 450,000 LEGO bricks, this model stands 17 feet high. LEGO bricks were introduced in Demark in 1958; the name is short for “play well” in Danish. While the company has created increasingly elaborate versions of its product over the years, Adam Reed Tucker uses only the simplest bricks and hinges, emphasizing the creative possibilities of simple materials. The project is “all about celebrating architecture and using plastic, interlocking bricks as my medium,” he said. “Lego was the easiest three-dimensional medium to use because it doesn’t require gluing or cutting, it’s self-contained, interlocking, and everyone knows how to snap them together.”

Tucker’s models will be complemented by a selection of black and white photographs, printed on steel, of Chicago architectural landmarks by Moline artist and Figge trustee Hunt Harris. Having purchased his first Kodak Brownie camera in grade school, Harris built a home darkroom and photographed for his high school newspaper, but left photography for a business career. In 2003 he began experimenting with the then-new digital cameras, and has gone on to create a substantial body of work on travels around the world. This selection of images of Chicago was created especially for the exhibition. 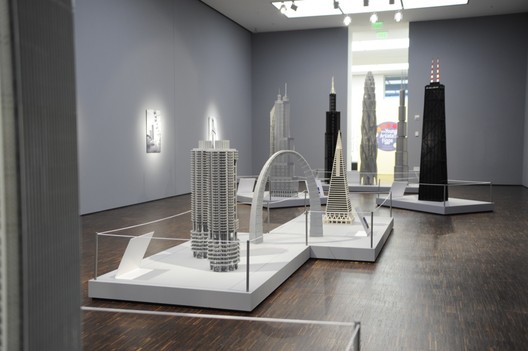