Sigurd Lewerentz is one of Europe's greatest, relatively unsung 20th century architects. He was educated as a mechanical engineer at Chalmers University of Technology in Gothenburg, but it was an architectural apprenticeship in Munich that set him on his career path — a path that "led him to be revered as one of Sweden’s most eminent architects." This sought after reprint of Janne Ahlin's seminal monograph has now been made available once again.

Sigurd Lewerentz, Architect is a new facsimile reprint of the first monograph ever written on Lewerentz and his work. Originally published in 1985 in Swedish, this legendary book tells the story of his life and presents his entire body of work through a combination of texts, photographs, drawings, and plans. This edition sets Lewerentz in a contemporary context through a concluding essay on his work and legacy by the German-Chinese architect, critic, and professor Wilfried Wang. 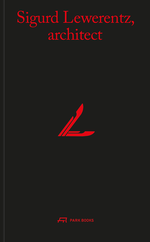