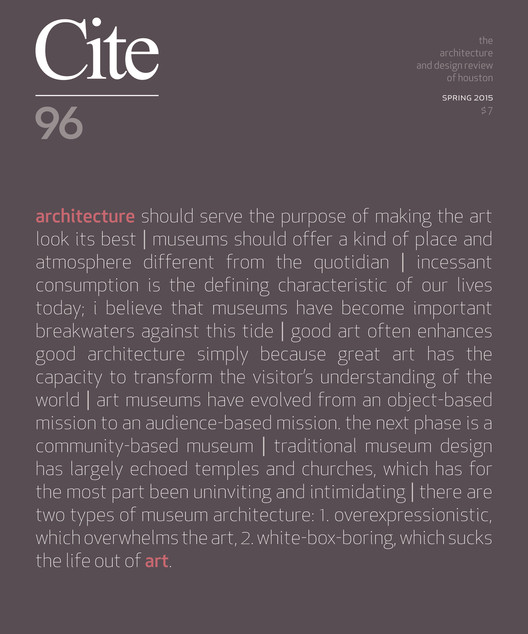 In his fifth volume of Renzo Piano Building Workshop: Complete Works, immediately following the description and analysis of the project, Peter Buchanan compares and contrasts the Nasher and Kahn’s Kimbell. (The text, published in 2008, predated Piano’s Kimbell commission.) In reference to both buildings and as a “criterion of architectural quality” Buchanan speaks of “...the achievement of seeming inevitability in which every part of the design has found its exact form and place within the internal logic of the scheme.” The question we might ask is whether Piano’s addition to the Kimbell achieves this standard.

Kahn’s Kimbell is extraordinary and unmatched for its synthesis of the parts and the whole. Beyond the synthesis of form, space, structure, and light within the cycloid vaults there is the “inevitability” of the linear, two-story light wells, for example, that bring natural light to office and service areas at the lower level and, likewise, the courtyard that bypasses the gallery level to bring light to the conservation area also at the lower level. It is also somewhat remarkable that the loading dock door on the north facade fits so effortlessly in the twenty-foot vaulted bay.

Kahn’s building has nevertheless been criticized for the way the auditorium and the library were squeezed into the building modules. We can imagine, however, that the freight elevator located, almost as if a freestanding object in the vaulted bay of the cafeteria would have caused the architect more grief since it does not conform to the reigning servant/served order of the project. These are quibbles when compared to the near perfection of the overall layout.

Piano’s pavilion assumes the internal logic of Kahn’s building for certain aspects of the design, develops its own logic for others, and draws upon over thirty-five years of experience in museum design for many.

Piano’s glass-roofed pavilion matches the overall length of Kahn’s building and aligns the new with the existing. He divides the building mass into three parts just as Kahn did. He enters in the middle bay. Piano twice translates Kahn’s system of double stairs into his project (once in the same direction and once flipped), and the well that lights his auditorium echoes the light wells of the earlier building. While visitors are not able to actually pass through the project as is possible in Kahn’s building, Piano’s auditorium light well provides a connection to the outdoors, predominately the sky, and counteracts any dead end effect of the underground portion of the project. The light well is the end of an axis that begins with Darnell Street to the east, moves up and through Kahn’s building via his double stair, through the yaupon holly grove and newly planted courtyard, through Piano’s building and down into the auditorium via another double stair. It is a rich succession of spaces and precisely the sequence Renzo Piano Building Workshop depicted in presentation section drawings. It is difficult to imagine that the axis could ever be extended further to the west. Just as Kahn’s building was so complete that any direct additions would have spoiled it, the new Kimbell is also complete.

Piano also takes cues from Kahn for material choices and details. After exploring travertine for exterior finishes, Piano decided to use a meticulously crafted, titanium-laced concrete that has a cooler tone than Kahn’s. He borrows the two-foot square dimensions of Kahn’s columns for his own, and he closes the space between concrete walls and the roof structure above with a glass band much as Kahn did. Piano’s building is slightly taller than Kahn’s, but since its floor level is three-and-a-half feet lower, its horizontal glass roof remains below the top of Kahn’s cycloid vault.

The use of a repetitive module is common in both Kahn’s and Piano’s work in general. Kahn’s Kimbell has two modules with columns placed at twenty-two foot centers for the cycloid vaults and eight-foot centers for the flat-roofed areas between. Piano chose a ten-foot module for his glass-roofed pavilion that is made apparent by the tightly spaced concrete columns on the north and south elevations. The columns support paired laminated beams of Douglas fir oriented in the north/south direction and thus following the general thrust of Kahn’s building. Inside, the close spacing of the beams reads more as a field rather than a module. Piano’s module, however, does not always allow for the same “inevitability” as did Kahn’s, and the delivery area at the north/west corner of the glass-roofed pavilion is unable to conform to the internal logic of the building since large vehicles simply cannot pass between columns spaced at ten foot centers. This part of the project takes on the form of an add-on.

In some respects Piano’s Kimbell is a hybrid, a “best of” his research and projects elaborated over the years – realized or not. At a planning scale there are often strongly expressed parallel walls (this time in concrete) and building volumes integrated into the landscape as sod-covered forms. At a structural level, laminated wood beams are a material of choice. At a technical level, the ingenious “breathable floor” in Fort Worth that uses narrow, open joints between the floor planks to allow for the delivery of conditioned air is a solution that has been in gestation for a while. In detail, the glass roof complex is a combination of elements from various projects and studies: slightly curved, fritted glass panels that form the building enclosure; flat, cantilevered, perimeter glass panels that participate in the building’s image; exterior louvers covered with photovoltaic cells that shade and protect the glass roof below, and a fabric scrim inside that diffuses light and softens the space.

Judging from the number of commissions he has received since he completed the Menil Collection in 1987, Renzo Piano’s model for the contemporary museum – simple spaces, with naturally and evenly lit galleries – is highly appreciated by the museum world as a good environment for art. Some museums by other architects over the last twenty-five years may be more significant as buildings, but less noteworthy as museums. By now we know Piano’s approach of the “roofless” museum – the entirely glass-roofed building with light diffusing and shading layers that are adapted depending on the context. While Piano’s recurring concept may cause a certain fatigue in the architectural community, it remains desirable for museum directors, curators and collectors when considering an individual building to be inhabited.

There are some significant differences between Piano’s Kimbell and many of his other projects. Most of Piano’s museums were conceived for modern and contemporary art and hanging surfaces are generally gypsum board and white. The Kimbell’s collection is composed of earlier, historical works and the concrete walls are at the same time a response to the collection and to the travertine walls of Kahn’s building. The wall surface of the actual building is limited, however, and a system of movable, fabric-covered exhibition walls, also inspired by those in Kahn’s building, was developed. These thin partitions are bolted to the floor in predetermined positions and will likely be the primary hanging surface in the South Gallery which was envisioned for traveling shows – more like a kunsthalle – and is even more open, loft-like, and straightforward than most of Piano’s exhibition spaces. There are also more openings to the outside with views to the lawn to the south and to the street and passing traffic to the north, and the considerable amounts of light coming in from the large glazed facades make Piano’s trademark top lighting less palpable. The transparency of Piano’s building would also make the museum more accessible to the public and the art more of an everyday experience. Kahn’s building is more introverted and ritualistic. It speaks to our emotions while Piano’s building speaks to our senses.

Having worked in Kahn’s office during the late 1960s, Piano says that he respects the elder architect’s quality of “patient determination.” Piano has likely developed the same quality as well as humility and restraint while maintaining an ember of provocation. The potentially egocentric planning decision to place a building in Kahn’s front yard was countered by a reverent architecture. Older and wiser may allow for making a mark without making a splash. 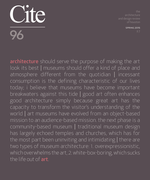 Cite: The Architecture + Design Review of Houston, Issue 96
Subscribe to Cite Magazine Find out how to buy Issue 96